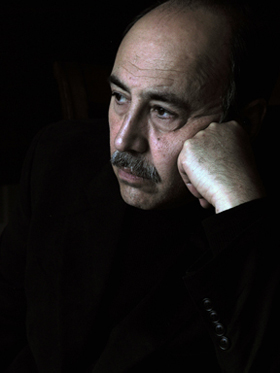 There were few people sitting at the bar when Michael and I entered the Lafayette Bar in Easton, PA, on a recent Saturday night. We went straight to the rows of nearly empty tables in front of the stage. There we spotted some friends and sat down to talk while the band sound-checked with Marcus, the full-time sound man.

Then Tunsei, the owner, came to sit in front where he could let out his "I like it" with feeling, as he often does, swinging the tassel on his fez. His lady, Erica, wasn't there. Unusual. Turned out she was baby sitting her two-year-old nephew who'd gotten a baby sister a couple days before. Regulars came to greet Tunsei and chat awhile, then dissolved back into the bar crowd where smoking was permitted. That's how it is at the Lafayette. Show up, pay your respects to Tunsei, enjoy the jazz and you're a regular.

Meanwhile, the band was warming up. Once known as Frankie G back in the day, pianist Frank Giasullo brought his quartet out to play a few standards and some originals. Dr. Neil Wetzel, Director of Jazz Studies at Moravian College, played tenor, alto and soprano saxophones, New York-based John Loehrke on bass and sidekick Ronnie Glick, drums. It was Glick's wife, Michelle, who came out of retirement to sing for Tunsei just a year ago (April 2014). The band had rendered its first two tunes when I turned around to see that the tables were full. The bar was packed. The stools lining the walls all were occupied. Word gets around.

The foursome kicked off with Giasullo's original "Dr. Nick," a peppy number punctuated by Glick hitting his sticks on the snare drum rim, Wetzel on tenor, and Giasullo's Latin-flavored piano solo. The tune is dedicated to a friend of Giasullo's, a chiropractor, who died too young. Easy to imagine what adventures these two must have shared. Another original, a wistful ballad, "Til Next Time," also recalls the friendship and hope they'll see each other again.

On a brand-new electronic synthesizer, the piano sounded a little too bright, especially in the higher registers, but probably all right to overcome the clamor of the Lafayette. This night's performance had harder edges and sharper curves than I'd heard in Giasullo's music before. Could there be a steeper learning curve to master the nuances of such a complex instrument? When you listen to Giasullo CDs—he has four—his renditions are smooth and sure as a chauffer-driven limo. Giasullo was, after all, educated as a classical pianist, and didn't turn to jazz performance until his 40's.

"M. Renault," so named because Giasullo thought it sounded like the theme to a Peter Sellers' movie, is both mysterious and amusing. Wetzel played its snaky melody with Giasullo all percussive on keyboard piano. Giasullo has never recorded Oliver Nelson's "Stolen Moments," but he really should. It's one of his favorites, with a dreamlike quality that may be inherent to the tune itself, or may be one that Giasullo imparts. The joyful Sonny Rollins "St. Thomas," was an upbeat end to the set.

The next two sets included "You Don't Know What Love Is," another Giasullo favorite, and "Autumn Leaves," which he has recorded twice, on First Light and Until The Next Time. They closed with his thoughtful "A Good Question," from his first recording in 1986, Expedition. Nothing beats nostalgia for inspiration, though, than his newest CD, Kensal Road, recorded in the UK in 2011. With titles like "Looking Back," "From A Hilltop," and "Near Miss," all originals, it's easy to spot Giasullo at a crossroads. Major life changes, including the sale of the hilltop house he and his wife built, are all reflected in the depth of his newest works. But out of despair can come great music. Still, one suspects that the philosophical question he posed to himself in 1986 has yet to be answered. Kensal Road also includes Giasullo's arrangement of the traditional "House of the Rising Sun," as melancholy a tune as there is, and the only song not written by Giasullo.

If you go: Eat dinner beforehand. There are fine eateries populating Easton and with a 9:30 start you have time for a leisurely dinner. Parking is plentiful either on the street or the free lot to the left of the building. Tables are set up for four, but seldom remain in that configuration. Count on sharing a table or being in close proximity to your neighbors and don't be afraid to start a conversation during the breaks. There are always interesting people at the Lafayette Bar.