By Elliott Simon
December 13, 2006
Sign in to view read count 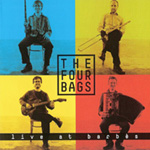 Personnel-wise, the Four Bags have a more than tenuous connection to Balkan beat masters Slavic Soul Party. Musically however, this foursome treads the more ambiguous territory of worldly flavored chamber/contemporary classical jazz. This is turf the Four Bags have nurtured and in a large way defined. Their two previous releases included, among classically grounded originals, the Beach Boys, Bertolt Brecht and Chopin. Live at Barbès, artfully mixed by downtown keyboard wizard Jamie Saft, captures the quartet during two nights at one of its favorite Brooklyn haunts.

In part due to the strength of the compositions, but owing more to the potency of its musicianship, the Four Bags amaze with the quality of their group dynamic, which exquisitely meshes the unlikely musical camaraderie of trombone (Brian Drye), accordion (Jacob Garchik), electric guitar (Sean Moran) and soprano sax/clarinet (Michael McGinnis). The disc begins with the puckishly cartoonish McGinnis original "Tent Song and moves through a dozen pieces that include novel interpretations of music from Schoenberg and Northeast Brazilian accordionist/folklorist Luiz Gonazaga, as well as Matt Glassmeyer's Beastie Boys-inspired "Pin/Needles and a beautiful version of Louis Phillipe's "Rainfall that alternately portrays precipitation by soprano joining with trombone and guitar. Throughout, the Four Bags show their arranging and creative acumen.

The Drye original "The, The Cheat possesses an especially catchy riff where the guitar shares its timbre with clarinet and then trombone. All players greatly impress with their accomplished compositional skills: McGinnis returns with both the fragile ballad "Iowa Requiem and the neo-classical closer "Valley Song ; Garchik contributes his gothic burner "Accordion Tune and the contemporary classical piece "Not Titled ; Moran delivers Brechtian enchantment that has McGinnis on bass clarinet and Drye adding a gorgeous dark patina to "The Fall ; and Drye offers hypnotic acknowledgement with "OK James.

Continuing in their previous vein but with all new material, this offering immediately hits home with enchanting precision, wonderfully unique voicings and advanced compositions.