By Norman Weinstein
August 20, 2005
Sign in to view read count 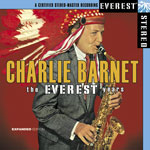 Charlie Barnet, a talented big band leader and saxophonist, must have found himself waking up on the days when these two albums, now packed on a single CD, were recorded in 1958, and thought he was in 1938. Sessions like these are what the term "retro" is all about. Everyone is quite workmanlike in the studio. There are lots of the old favorites like "Begin the Beguine" and "Molten Swing." Bill Holman's arrangements are bossy and brassy and do little to suggest they were written in the '50s.

To be absolutely fair, Barnet performs quite vividly and passionately on alto and soprano sax on most numbers. Among the talented players—when you can hear them through the airless, cluttered Holman arrangements—are trumpeter Clark Terry and alto saxophonist Phil Woods. Lots of talent here could have been better served by better arrangements.

This reissue should also be noted for having the most politically incorrect cover photo since Thelonious Monk's Underground. In this instance, Barnet is decked out in a feather headdress, probably because the album opens with "Cherokee/Redskin Rhumba." To add insult to injury, a quote from Nat Hentoff's liner notes reads, "Barnet's late fifties sessions for the Everest label continue to prove that the spirit of the big bands is far from extinct..." Get it? The vanishing Indian chief? I wonder how much Barnet's arm had to be twisted to pose for this. His good arm certainly pressed the right keys on his sax, but sorry, Charlie, in 1958 there were guys doing big band music who weren't looking back, and nether Duke nor Sun Ra would insult a Native American or wish to live in a musical time warp.