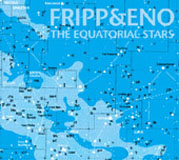 While the technology was, in retrospect, remarkably simple, guitarist Robert Fripp, best known for his work with the perennial King Crimson, and synthesist/producer Brian Eno literally invented a new musical form when they hooked up two Revox reel-to-reel tape recorders in '73, allowing Fripp to layer an almost infinite number of loops to create a groundbreaking technique called Frippertronics. On '73's No Pussyfooting and the '75 follow-up, the more sublime Evening Star , Fripp truly developed the orchestral possibilities of the guitar, while Eno's studio finesse coaxed the sounds into hitherto unheard of aural landscapes.

In the ensuing thirty years both artists have evolved textural potentials in music. Eno, of course, has been responsible for taking the rhythmically and harmonically static concepts of his early work with Fripp, evolving them into a series of trend-setting recordings called Ambient Music, with the idea that the music could be part of the cultural whole, felt as much as heard. His experiments with sound processing and loops have spawned a whole musical subculture that has often imitated, but never quite copied, his unique musical sound and concept. Fripp, on the other hand, has continued to develop the Frippertronics technique, utilizing guitar synthesis and digital sampling and looping technologies to evolve a more advanced sound process called Soundscapes that is used regularly with King Crimson, but has also resulted in a number of fine recordings dedicated exclusively to the methodology.

With The Equatorial Stars , Fripp and Eno reunite, and the result is unquestionably the finest recording they have made to date. Combining the all-encompassing textures of Eno's Ambient Music with Fripp's more sonically-broad Soundscapes, the two create a recording that may be steeped in technology, but feels somehow independent of it. While there is no way that untreated instruments could sound this way, the whole process feels somehow more organic than its predecessors. Fripp's tone is warmer and more subtle; Eno's processing creates lush and unique timbres. And while, with the exception of the heartbeat-driven "Lupus" and the more insistently pulsing "Altair" there is no real rhythmic or, for that matter harmonic, development, the end result is something that succeeds on two levels. This is music that can be played at a quiet level, supplanting the other ambient sounds around it but in a completely subtle way; or it can be played at a louder volume, creating a hypnotic and wholly involving space that demands attention in a strangely non-intrusive fashion.

Much like Eno's '83 ambient recording, Apollo: Atmospheres and Soundtracks , The Equatorial Stars can be imagined as a soundtrack to imagery that is highly personal. Broader in framework than its predecessors, The Equatorial Stars emerges as the finest addition to Fripp and Eno's collaborative efforts, the result of two completely unhindered and musically uninhibited minds.