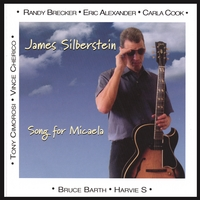 By all accounts guitarist James Silberstein has been a busy working musician on the Georgia, Miami and New York scenes for 25 years, but has operated mainly beneath the radar, only now releasing his debut CD, Song For Micaela, which finds him mining the juncture between post bop modernists like Pat Martino and more staid traditionalists like Tal Farlow. With a programme that combines some well-heeled standards with a number of interesting originals whose main purpose is to create an open space for the group to improvise, Silberstein has put together a comfortable and engaging session that may not break any rules but occasionally bends them.

"How Deep Is The Ocean," for example, is treated as a light bossa, with Silberstein developing the theme through a combination of linear and chordal playing. "Love For Sale" is taken at a fast clip, with Silberstein's rapid-fire solo bringing to mind Pat Martino's fiery intensity, but with a warm tone that is considerably lighter. "Nica's Dream," another burner, finds guest saxophonist Eric Alexander winding his way through the changes with an energy that is only surpassed when trumpeter Randy Brecker takes centre stage.

With the only constant, other than Silberstein, being drummer Vince Cherico, the recording runs the risk of sounding too much like a session, but Silberstein's flawless playing and mainstream predilection ties everything together into a neat package that maintains focus even as the players shift. Bassist Harvie S works hand-in-glove with Cherico on "House Party," a funky blues with an elliptical theme that could easily be in the Martino songbook, while co-producer/bassist Tony Cimorosi works similar simpatico interplay on Silberstein's title track, a light bossa that features Silberstein in an especially lyrical mood, although he's clearly not averse to tearing things up a bit at the same time.

The inclusion of a vocal track featuring Carla Cook, the Sergio Mendes tune "So Many Stars," feels a bit like the odd man out; still, it comes early on and doesn't detract from the considerable momentum Silberstein builds during the rest of the set. With feet planted firmly in the tradition, Silberstein is a confident player whose craft is finely honed, no more in evidence than on "Why Did I Choose You," a solo guitar piece that Silberstein contributes as a winding-down coda to the generally upbeat session. Song For Micaela introduces Silberstein, a well-kept secret, to a larger audience and bodes well for more to come.