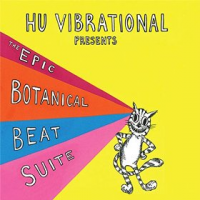 Uniquely atmospheric, this music evokes both the mysterious jungle as well as what it might be like to listen in space, outer space. Hu Vibrational Presents The Epic Botanical Beat Suite points to both the inner as well as outer journey. All of it exquisitely tethered by the Beat, or beats, beats that float in and out as if seamlessly emerging from one musician, one mind.

That one musician is Adam Rudolph. And yet, this isn't a computer- generated project coming from one desk, one human, one machine. Hardly. Rudolph has assembled an incredible array of artists to join him, 11 in all, in this followup to his three previous Hu Vibrational albums. Percussionist/composer/bandleader/tireless conceptualizer Rudolph trains his sights on a deeper, percussively more African and Afro-jazz groove. But it's not without its present- day affectations, drawing as it does on those ephemeral yet striking spirits of hip-hop and electronica. In fact, The Beat Suite distinguishes itself from not only its own predecessors but recalls similar undertakings by similar outward-bound creatives such as trumpeter Jon Hassell and ambient pioneer Steve Roach, not to mention Mickey Hart's Dig Rhythm Band project.

There's a continuous mind-meld that expresses itself over floating, roaming time signatures, from something wandering between a waltz and a straight 6/4 dance with the opening cut "Akete" to trance-inducing grooves in 5 with "Charas" and "Soma" in 7. But this is not an exercise in numbers, akin to all those creatively clever concoctions Dave Brubeck was cooking up more than a half century ago. Rather, Rudolph has assembled a tight, intuitively based group of musicians who are capable of training the listener's audial "sights" on the feelings this music creates, the focus more on the body than the head.

In addition to providing the "organic arrangements" to Beat Suite, another hat of Rudolph's, namely that of producer (and mixer), is worn in this marvelous collection that sounds even better when heard with headphones, the addition of longtime Bill Laswell engineer James Dellatacoma as co-producer only adding to the magic. The team of world-music percussionists joining Rudolph—playing on everything from frame drums, cajon, udu, hadjira and caxixi to slit drum, rebolo and tarija—includes members of Rudolph's 36-piece Organic Orchestra: Brahim Fribgane, James Hurt, Matt Kilmer, Tim Kieper, Keita Ogawa and Tripp Dudley. Special guests include bassist Laswell, Eivind Aarset on electric guitars, Steve Gorn on bansuri flute and Alex Marcelo on Fender Rhodes.

Perhaps nowhere else on the planet at this time is someone capable of blending the ancient with the modern, the purity of the acoustic with an uncanny naturalistic approach to electronics, than Adam Rudolph. Just listen to the funky grooves, the floating beat alongside the juice from Aarset's quietly grinding electric guitar refrains and Laswell's deep recesses on "Kwa-Shi" for a taste of what might jumpstart any cocktail party into one that dances, with a dance music style Hu calls "Boonghee Music." Or the delicious simplicity found with Marcelo's Fender Rhodes opposite the delicately driven jungle groove of "Agobi," Gorn's flute a welcomed echo of Rudolph's former late partner Yusef Lateef. In fact, while all eight of Rudolph's compositions are hefty listens in and of themselves, there is an inevitable flow that bridges all of them into what is ... The Epic Botanical Beat Suite.