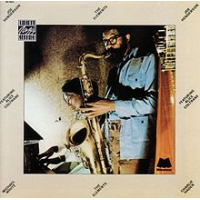 Whatever era Henderson you champion or pine for—his dazzling side work with Horace Silver and Lee Morgan or, as a leader, the 60's defiant Inner Urge or Page One, the 70's fusion/funk explorer of Multiple or the revered elder statesman of his later years—The Elements delivers some damn fine head music. With its shifting atmospheres, dynamics, world music palette —harp, horn, piano, percussion; bass, violin; and all the bells and whistles of studio wizardry circa '73, Henderson and company presciently present a tweet-free zone of consciousness that yes, we all need to escape to from time to time.

Playing with an inspiration that all the combative and awesome might the elements conjure, the four extended jams, "Fire," "Air," "Water," "Earth," cascade and jangle, giving each worthy improviser ample room to interpret the elemental as they see fit. Newly released on 180 gram vinyl with a limited run by Concord.