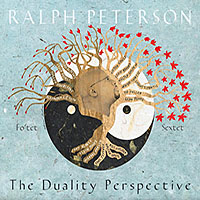 Balance is often overlooked in music criticism, yet it's such an important aspect in music-making and life. Light doesn't exist without dark, bold only takes shape when placed next to bland and earthbound realities are only truly understood by those who also know how to take flight. Drummer/educator Ralph Peterson understands this better than most, and The Duality Perspective documents his balanced outlook for all to hear.

This album is really two records in one, as Peterson splits the program between the latest incarnation of his two decade-old Fo'tet and his sizzling sextet, but the veteran maintains a sense of presentational continuity across these ten tracks. Part of the reason for this has to do with the bonds formed between the musicians and a shared philosophical outlook on how music should be made. The large majority of the players on this date have come under the expert tutelage of Peterson in some way, shape or form, and their connection and affection shows.

The other key to consistency here, which goes beyond the borders of either band, is Peterson himself. His pulse is the real connective tissue between the sounds of both groups. His drumming is always informed by a panoramic understanding of music, as he takes in the big picture and the small details at the same time. Peterson also posits that contrast is key to the realization of possibilities in performance, and understands that music, like life, can be a thing of beauty one minute and a slap in the face the next. He possesses a toolkit full of technique and taste that he uses to put every piece in good working order.

The clarinet and vibraphone-focused Fo'tet finds its footing with the swing-funk hybrid feel of "One False Move," takes Thelonious Monk's music to new places with an odd-metered Latin-ized look at "4 in 1," and wears its collective heart on its sleeve during "Addison And Anthony," which Peterson wrote for his twin grandchildren. The sextet is more typical in construction, with bass, drums, piano and occasional percussion in the back lot and saxophone(s) and trumpet out front, but the music still works off of the same sense of organic motion—flexible, yet focused—that's felt on the Fo'tet material. Saxophonists Tia Fuller and Walter Smith III sound terrific in this setting, but trumpeter Sean Jones is the undisputed star. His work on the final tracks—"You Have Know Idea" and "Pinnacle""—takes the music to new heights.

Peterson proudly displays the roots of his artistry on the album cover by name-checking mentors/heroes, but the music isn't about looking back at the past; The Duality Perspective thrives on the here and now.

One Flase Move; 4 In 1; Addison And Anthony; Bamboo Bends In A Storm; Princess; Coming Home; Impervious Gems; The Duality Perspective; You Have Know Idea; Pinnacle.