Graham Collier: The Day of the Dead 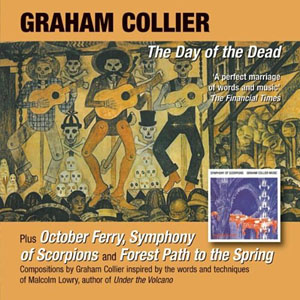 Graham Collier's death, in 2011, lends this release a sad air—at least until the gravity of the music is considered, because truly the composer/arranger has gained some measure of immortality through it. Recorded over the years 1976 to 1978, the albums collected here mark a period of transition from Collier the bassist and small band leader to Collier the composer for large ensembles who grasped the implications of the tonal palette such groups could offer.

In his way, he also came to grips with the implications of improvised music with spoken narration on The Day of the Dead (Disconforme. 1978)—which, over the course of its eight parts, encapsulates a perfect balance between Malcolm Lowry's prose (read by John Carbery) and Collier's music, which is as free here as it ever has been on record. Collier could call upon a roster of players every bit as committed to the task of taking his music off the page as Duke Ellington did and, over the course of this work, proven by likes of guitarist Ed Speight and saxophonists Alan Wakeman and Art Themen. All three turn in potent solos, highlighting the symbiotic qualities that were always a mark of Collier's writing.

Lasting just over 23 minutes, "October Ferry" places Collier's abilities as a colorist to the fore, extraordinarily balancing the composed and—at its most potent in Wakeman and Themen's contributions—the improvised. Themen is at his idiosyncratic best on "Symphony of Scorpions," where his tenor sax—by turns guttural and lyrical—sets the scene for a piece in which there's a greater than usual degree of abstraction. This is especially notable in the liquidity of the second part, an impression underscored by what is presumably John Mitchell's vibes work.

"Forest path to the spring," a duo for Speight and Themen, has the air of Francis Poulenc's chamber music about it, which only goes to show the breadth of Collier's palette. Its lyricism is beautifully realized, too, so much so that it acts as a sweet epitaph for one of music's most undervalued figures.