By FRIEDRICH KUNZMANN
October 28, 2019
Sign in to view read count 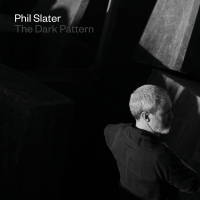 Australian trumpeter and composer Phil Slater has performed with a variety of renowned artists across the globe and stands as one of the most influential jazz musicians his country has to offer. Next to recording and performing with big names such as Lou Reed, Nigel Kennedy or Missy Higgins among others, the award-winning trumpeter leads and co-leads several bands, including the Phil Slater Quartet and Band of Five Names. On The Dark Pattern he is joined by fellow countrymen Matt Keegan as a melodic counterpart on saxophone, and Matt McMahon on piano. The rhythm section comprises Brett Hirst on bass and Sydney-based drummer Simon Barker, whose experimental solo endeavors can be sampled on the compilation release Way and Echo (self-produced 2019). The double-disc set discussed here is made up of compositions which take shape patiently and slow. They express their urgency and bite in the bending of tone and atmosphere rather than pace or structural shift. With The Dark Pattern Slater refers to his observation of "non-indigenous Australian artists, composers and performers struggling with the appropriateness and authenticity of their work in the context of Australia's history, location and conditions." This album represents his small contribution to that ongoing engagement with landscape by Australian musicians.

The quietness of the compositions, presented over a span of two hours, is deceiving, for an underlying boiling notion emerges in different shapes and colors between the rather minimal interplay at hand. The piano mainly relies on single note, single interval as well as triad patterns throughout, and only rarely guides the music in a melodic way. In combination with the sparse drum work of a tom hit here and a snare accent there, the rhythmic framework for Slater is often dry to the bone, letting him soar in isolation. Only little contemplation can be traced in the trumpet's tone and vocabulary; it rather diffuses a searching notion, based on the curiousness of what may lie around the bend. A sense of frustration can be found in the climactic sections, where a motif will appear in multiple repetitions and at growing speed, as demonstrated towards the last third of "Opal" or half way through "Glow," which features one of the solo highlights on the record.

At just over two hours, The Dark Pattern is certainly no easy listen, especially considering the few changes in pace, atmosphere as well as general compositional approach the nine lengthy compositions display. Not that none of those properties are present; "Third Bell" is based on a trickling dissonance-rich melody played on piano which merges into a play with intervals—reminiscent of twelve-tone music. Slater introduces seductive lines on trumpet before the band makes an abrupt cut and starts afresh, led by a straight drum beat and constant eights on bass. The closing section is made up of a melancholic crescendo. Midway through "The Promise," the band is at its most explosive and sees the trumpet twirl and swirl to a funky groove which relies on a steady snare and bass drum beat, underlined by poignant double bass plucking.

Still, the general tone and sound of this acoustic ensemble remain more or less unaltered throughout. The attention to detail of the reverberation of the room and the distribution of the different frequencies, combined with the careful employment of each musician's voice, recalls the aesthetic often found on the ECM label. Extensive elaboration, however, allows the musicians to delve even deeper into introspection and realize the different impressions to completion—no censorship, no trimming and not a single try to please anything or anyone other than their own conversations.

The Dark Pattern gives the listener a chance to really sink into the depths of a thick and hazy atmosphere. With some patience and by keeping to the different trails blazed through the thicket by trumpet and saxophone, one is able to navigate through the clouds and come out a little brighter on the other side. A marvel to experience.