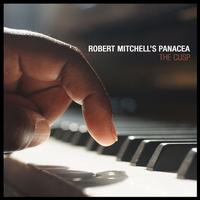 The recording is delivered with a squeaky-clean production sound that can only be a reflection of the leader's attention to detail, and a personal involvement at every level. Mitchell was certainly wearing his heart on his sleeve when writing this record—from his ensemble writing through to the string arrangements and lyrics.

"Panacea," the Greek goddess of medicine and healing, is a fitting namesake for the band, as The Cusp oozes tenderness, introspection, and therapeutic resolve, albeit with a healthy portion of rhythmic grind. Featured vocalist Deborah Jordan's voice fits the bill for healing quality; smooth and precise throughout the album, her delivery is consistent, and the openness of the recording suits her innocent timbre. The vocal writing is always fluid, even when offset by cleverly syncopated and thoroughly worked-out ensemble playing.

The opener, "Essence," catches just that of the record. Jordan's voice floats over a building groove, underpinned by Empirical back-liner, drummer Shaney Forbes. The strings are exploited to full effect—used in the forefront of the melody, as backings, and, in an impressive soli section, doubling with the piano. Bassist Tom Mason also plays violin, alongside violinist/violist Julian Ferraretto and cellist Benjy Davis.

"Aura" is another rhythmic twister, with Mitchell displaying his fantastic ability to displace and entwine parts to great effect. Percussionist Hammadi Valdez adds reams with his intricate patterns, as the band weaves.

Pieces such as "Mio Inamorato" and "Lucid Deamt" offer more personal moments as bare piano-vocal duos, where Mitchell's playing is understated and elegant, supportive and open. "Blessings" is beautifully introspective, and features the whole band simmering on top of Forbes' gorgeous brush-work. The strings are well-used, and an interesting pizzicato section sets up the start of a stunning yet modest solo from Mitchell.

Spoken word artist HKB Fin makes a very welcome appearance on the energetic title track. The band's sound here is at its most organic, and the recording is realized with less of a clinical touch. While Finn speaks his verses, his voice and delivery add warmth and depth. Mitchell switches from piano, shining playing the fender Rhodes, with a solo that is certainly one of the album's best moments.

Mitchell's band features a sterling lineup of players from the UK scene. His compositions are personal and arrangements thorough. Although often complex in content, he manages to retain a certain level of accessibility and reserve that will make this record appeal to a wider catchment. The Cusp marks Panacea as one of the most original vocal-led groups on the UK scene.

Essence; Aura; Mia Inamorato;Fortunately So; The Blessing; The Cusp; Lucid Deamt; A Map of the Sky; Quantum; Flawless.