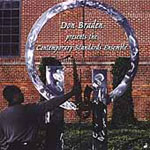 It's a known fact that the majority of jazz performers, both past and present, draw on popular material in some way or form for a part of their repertoire. These items are the "standards" that have become the language of most improvising musicians. These tunes have stood the test of time, but emanate from a previous era. Technology, values, and mindsets have changed since the days of the Porters and Gershwins and one has to really wonder whether or not there's potential in today's popular music for the kind of lasting material that a jazzman would find worthy. While the jury may be out on this one, it might do some good to survey a few attempts to bring jazz sensibilities to the current medium. Miles got us started with a sublime version of Cyndi Lauper's "Time After Time" and piano icon Kenny Barron found the beauty in Sting's "Fragile." More recently, Herbie Hancock and Joshua Redman have recorded entire albums devoted to pop hits of the day.

This brings us to the disc at hand, tenor saxophonist Don Braden's attempt to speak in the present vernacular. The Contemporary Standards Ensemble is really an update of the kind of three and four horn writing that Braden has excelled at since his early Criss Cross days and such terrific albums as After Dark. Its namesake notwithstanding, only half of the program features pop tunes, with the other half consisting of originals by Braden and bassist Richie Goods. Things get underway with Steely Dan's "Kid Charlemagne" (looks like The Dan are getting some overdue recognition considering that Christian McBride's current disc covers "Aja") and the heavy groove and serious swing effectively announces that Braden's jazz is the real deal. Drummer Ralph Peterson rocks the house with a Nawlins Second Line cum funk groove and his interaction with the band throughout is a real asset.

As for the other modern standards included, there's the two Roberta Flack hits "The Closer I Get To You" and "Feel Like Making Love," the former a ballad showcase for Braden and the latter a "bump and grind" style blues number (look out for George Colligan's charged statement!). Stevie Wonder's "Overjoyed" is taken as a festive Latin romp and designates Braden's further involvement with Stevie's material since "Creepin'," which appeared on the previously mentioned After Dark. As for Braden's own writing, one shouldn't be surprised to find stimulation there as well. Adding the final element, group chemistry is undeniably strong and this debut of a new assemblage for Braden comes highly recommended.

Kid Charlemagne; The Closer I Get To You; The Vail Jumpers; Dance of the One; Overjoyed; Feel Like Making Love; Nandhi; Arise.