By HRAYR ATTARIAN
November 5, 2006
Sign in to view read count 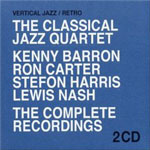 The names of Johann Sebastian Bach, Pyotr Ilyich Tchaikovsky and Sergei Rachmaninoff do not necessarily conjure images and sounds of jazz in one's mind, that is until one has listened to recordings by the Classical Jazz Quartet. Although these musicians utilize the same instruments as the Modern Jazz Quartet, they are in no way clones or copycats of that groundbreaking group. They have very much their own sound and style.

This is not surprising given the huge talent of the musicians involved; all four are virtuosos on their respective instruments. The themes, although composed in a different time and place, become excellent vehicles for complex, sometimes, bluesy, often swinging and always fresh improvisations in the hands of these musicians. And although one might think of any recording billed as "classical meets jazz" as background music, this music definitely is not.

The double CD consists of the group's three previously released recordings, plus one bonus track featuring their interpretation of Handel's Hallelujah. The first set consists of selections from Tchaikovsky's The Nutcracker. The arrangements here are tight, and the group improvisations are logical and very much in the hard bop/post bop tradition. The second set, spanning both CDs, consists of different selections by Bach. The arrangements here are looser and more relaxed, and the style varies from a Latin-tinged Brandenberg Concerto No. 2 to the very bluesy Brandenberg Concerto in A Major.

The third set is where the Latin and blues themes alternate prominently in several of the movements of Rachmaninoff's Piano Concerto No 2 in C Minor, with an occasional ballad thrown in. The improvisations, by both individual musicians and the group, are uniquely fresh, especially the way they play off each other and the main musical theme. Each instrument is used as both a front-line instrument and part of the rhythm section.

The members of the group are musically compatible, both in their ensemble playing and in the way they support each soloist. The music in no way diminishes from the value of the masterpieces interpreted here; instead it sheds new and fresh light on them, and by doing so, it affirms yet once more the universality and timelessness of music.

No, the names of Johann Sebastian Bach, Pyotr Ilyich Tchaikovsky and Sergei Rachmaninoff do not necessarily conjure images and sounds of jazz in one's mind, but maybe they should—because brilliant music is thought-provoking, uplifting and enjoyable, no matter what the label.