By DAVID BECKMAN
September 1, 2000
Sign in to view read count 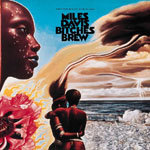 No other musician in the 20th Century explored the possibilities of music as fiercely as trumpeter and bandleader Miles Davis. He frustrated critics and fans alike as he opened himself up to unexpected directions in musical thinking while continuously shaping and refining his remarkable skills on trumpet. Critics tried and tried to squeeze his musical journeys into a box called "jazz," but Miles would have none of it. And then, in August of 1969, Miles decided he'd put all of us in an impenetrable box and dare us to break out.

While Miles did warn us with the electronic dabblings of his mid-sixties quintet and In A Silent Way, there is really no way to be prepared for the complete realignment of one's musical schematic that is Bitches Brew. To even begin to understand what was created in these sessions, we need to get a little perspective on what led up to them: a phenomenally talented composer and trumpet player; a true musical seeker who squeezed every last morsel of musical information out of Charlie Parker, Dizzy Gillespie, Bud Powell, Gil Evans, Mingus, Coltrane; a jazz cat for hire who barely clawed his way out of heroin's grip; a man who influenced the evolution of an art form with his astonishing collaborations on recordings like Round About Midnight, Milestones, Miles Ahead, Sketches of Spain, Kind of Blue and In A Silent Way among many others arrives at the vortex of Jimi Hendrix and James Brown surrounded, as he'd always been, by the visionary musicians of the times: Herbie Hancock, Joe Zawinul, Chick Corea, Bennie Maupin, Wayne Shorter, Dave Holland, John McLaughlin—just a few of who would participate in Bitches Brew. Clearly, Miles Davis was at the precipice of something massive, something almost unsettling in its hugeness. Sure enough, this sprawling team of talent would create with Miles the most impenetrable, incendiary, and finally revelatory musical experiment of his lifetime.

When listening to the music of Bitches Brew and the Bitches Brew sessions, space and time tremble, quiver, and become elastic. One moment, you're traveling rapidly, furiously backward toward the Big Bang—the next, you've stopped and hang suspended, a million light years from nowhere, curling dangerously across some cosmic bump. Then, all at once, you're surging forth, speed increasing, any ability to gauge time lost in the burn, spinning and tumbling upward, downward, outward. Images—the elapsed time of an orchid in bloom, pixilated fast-motion fragments of urban decay—careen, stop, rewind at another speed, only to flicker forth cautiously. There is a feeling of expanding, contracting, implosion, stillness. The rules of physics have become open to interpretation. The grid upon which the universe is mapped ripples slightly—patterns shift. Towering creatures of color and light groan and sway. The thread between the first cell and the end of time coils and uncoils wildly like a snapped powerline in a hurricane, twisting and spewing energy. . . What was created in this music—in its probing, tentative tempo, its evolving rhythms, its blasts and blurts and belches of melody—was something strangely familiar yet entirely original, entirely its own thing. What coalesced as these ten to twenty musicians fed frenzy-like off the brash impulses of one another was a music that literally lifted itself away from their conscious control and began making its own decisions. At times fearsome, others breathtaking, Bitches Brew is music as liberated organism, surging and soaring, gorgeous and terrifying, taking you dark and fantastical places to which only it holds the map.

Much like the music contained within it, this box set feels mythical, a lot like some otherworldly text unearthed halfway across the cosmos. The construction of the 148-page book along with the art and the graphic design throughout is intensely aesthetic. The photographs of Miles and the essay by Carlos Santana are the jewels of the package. One complaint is that the track information is buried amidst the many pages and clumsily found—I recommend photocopying those pages, drawing or painting on the copies while listening to the music, and then posting them someplace accessible. And while Miles biographer Quincy Troupe's expansive 70-page essay is flush with compelling insights, ranging from the influence of Jimi Hendrix priestess Betty Mabry on Miles' flow to the significant use of overdubbing and other new postproduction techniques, his lengthy track-by-track analysis feels belabored and seems to miss the point. Suffice it to say that much of the previously unreleased material travels along similar time wrinkles, some of it leaving unanswered questions for the listener to forever puzzle over. That's both the punishment and the reward. The haunting riddles of Bitches Brew rip at us and taunt us—however, the willingness to engage those riddles and ghosts, fully and with heart, produces thevisceral joy that can shatter the box Miles put us in. That joy, while exhausting and unnerving, is his legacy and his gift to us.