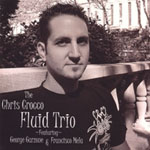 If the old expression "you are the company you keep has any credence, then young guitarist Chris Crocco would appear to be headed in the right direction. For his debut CD, he gets strenuous support from the impressive Cuban-born drummer Francisco Mela as well as from veteran saxophonist George Garzone, whose tenor voicings can range from melodic to dissonant with many steps and moods in between.

Mela is a very animated and accomplished player who seems to enjoy his vocation as much as audiences love hearing him. The nature of this bass-less band requires its drummer to be more than just a timekeeper and Mela provides all the bells and whistles to keep this "fluid band rhythmically afloat.

In a live show to celebrate the CD release at Cornelia Street Café, Mela literally whistled while he worked, at times providing other welcome and appropriate accents by tapping a tambourine, shouting out and even singing as an introduction to one of Crocco's songs. Of course he is only a third of this hard-working, earnest trio and the others make significant and confident contributions of their own to the proceedings. Crocco's playing and some of his compositions can be dark and somber, though also probing and edgy. In the live performance some of his playing seemed to resonate so deeply it sounded a bit reminiscent of organ, especially in show and CD openers "Piece of Mind and "Meta-Ethics.

But there's a brighter side to some of the music and Crocco's interpretation on the guitar lightens up as well. "To Silvia (Don't Say Goodbye) is a lyrical, beautiful ballad with strong melodic support from Garzone's more tender tenor vocalizing. And "If I Only Had a Brain, from The Wizard of Oz, provides ample opportunity for inventive improvising.

These two pieces highlighted a highly energized live set. The skillful Garzone piloted the more buoyant mood further with a rousing version of the standard "I Remember You —not on the recording and so a nice reminder that with jazz outings you never know what you are going to get.