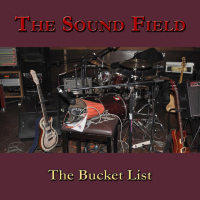 The cryptic nature this band's name dissipates fairly rapidly as The Sound Field's album plays. Similarly, the meaning of the record's enigmatic title, The Bucket List, clarifies with each passing cut so that, by the end of this debut effort, its definition has become as clear as the sound mix.

Graphics on the compact disc itself and the CD package reflect the energetic and eclectic approach of this California-based ensemble. On "Deep Red Joy," a country twang seasons the blend of Chuck Berry guitar Mark Karan mixes with Pete Sears' boogie-woogie piano. A waltz called "This House" marks the next appearance of this who's who of guests: Jason Crosby's violin accentuates the easy sway of the core trio that is The Sound Field. And the well-integrated musicians move into decidedly more rocky terrain with "Legends and Angels," where Mookie Siegal plays organ lines that swirtl around heavy electric rhythm guitar lines swirls. Similarly foreboding strains of that keyboard introduce "Fearless," which elevates into a more uplifting air mirrored on the rise of Deborah Grabien's voice.

As "Tell Me Again" suggests, the musical antecedents of this San Francisco trio may sometimes be too obvious-here it's Jefferson Airplane's Grace Slick and It's A Beautiful Day—but that doesn't appreciably detract from the music. In fact, such comparisons may actually heighten the impact, rendering the whole equally alluring for those familiar with the roots or not. And because those influences are rare on their own terms, the extent to which The Bucket List encompasses a greater range of styles becomes all that much more impressive. To wit, David Lindley plays bouzoukis on "This Road" and "Fables of the Wings," further widening the arrangement of "Ghost" with Hawaiian guitar and reinforcing the title of "You Better Duck" with electric lap steel.

About The Sound Field