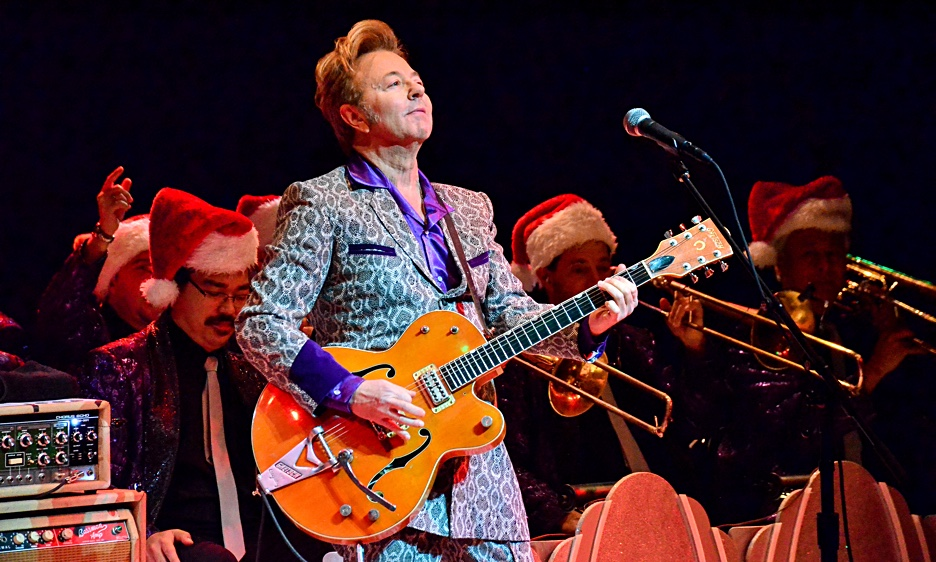 Now in its 15th year, Brian Setzer's annual holiday tour has become a legendary extravaganza. The rockabilly guitarslinger loves Christmas and really gets into the spirit. Setzer has brought his holiday-themed spectacular along with his big band to the New York area and Westbury, NY's NYCB Theatre every year and it sells-out each and every time. As in the past, the performance featured the traditional holiday classics (secular and spiritual) that these tours are centered on, Stray Cats tunes, selections from his solo career and well-chosen and inspired covers.

The opening set by the Lara Hope and The Ark-Tones, a tight four-piece rockabilly outfit based in nearby Kingston, NY was both powerful and exciting. Comprised of lead-singer and rhythm guitarist Lara Hope, upright bassist Matt "The Knife" Goldpaugh, lead guitarist Eddie Rion and drummer, Eli Marzano, this is a band that is making a name for itself. Highlights of the short, fun and fiery set included "Love You To Life," "Dr. Bartender," "Fast Cheap Or Well Done," "Whiskey Pick" and the set-closing "I Drink To Your Health" which was dedicated to Hope's Grandma who was in the audience. When the set ended and the lights came up, it was obvious that the band had won over the audience. When Hope announced that she and the band members would be at the merchandise table to meet fans and sign CDs, the crowd cheered.

After a short intermission during which the PA system blared classic rockabilly, pop, rock 'n' roll and blues, the Brian Setzer Orchestra took their places on the intimate venue's revolving stage. The musicians began to play a driving version of "Dig That Crazy Santa Claus." Thew crowd rose to its feet when Setzer appeared and joined his band. The powerful set provided the middle-aged crowd with a feel-good evening of Setzer's special brand showmanship and roots-influenced and surf-drenched rockabilly-inspired Christmas music. Following Setzer's entrance and the opening number, the band got into the holiday spirit with "Rockin' Around the Christmas Tree." In addition to the "Stray Cat Strut" (the song that put Setzer and his original band, the Stray Cats on the map), the band mixed big band versions of Christmas music with Setzer tunes and fantastic covers. The evening included versions of: "Boogie Woogie Santa Claus," "Gene & Eddie," "Angels We Have Heard On High," "The Dirty Boogie," "Runaway Boys," "Jump, Jive an' Wail," an amazing version of the Beatles' "Hey Bulldog" and "Here Comes Santa Claus (Right Down Santa Claus Lane)."

The middle portion of the set included an instrumental tribute to the recently departed Roy Clark that left the audience speechless. Setzer also performed a version of "Ring of Fire" that would have done Johnny cash proud. He and the band also performed "Fishnet Stockings" and "Rock This Town" before he and his big band delivered a nuanced and beautiful version of Tchaikovsky's signature composition, "The Nutcracker Suite."

As always, Setzer adhered to the "leave on a high note" and "always leave them wanting more" showbiz credo when he and his band brought the entire audience to its feet with the evening's closing number "Jingle Bells." This energetic and fun version of the holiday tune had members of the audience, ushers, roadies and musicians all grinning from ear to ear.