Home » Jazz Articles » Champian Fulton: The Breeze and I 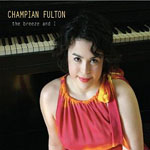 Unlike the catholic approach to music evinced by many of today's young artists, the twenty-five year old singer and pianist Champian Fulton positively thrives in the confines of the American Popular Songbook. To cite one example from The Breeze and I, Fulton's fourth disc as a leader, an instrumental version of "My Heart Stood Still" includes an introduction which quotes "The Trolley Song" and, in the middle of her solo, references "The Surrey With The Fringe On Top." During the record's eight vocal tracks, her voice and piano are mutually supportive. In addition to making incisive comments amidst the lyrics, the instrument serves as a bridge between her voice and the steady, knowing accompaniment of bassist Neal Miner and drummer Fukushi Tainaka. Add to Fulton's list of accomplishments the wisdom of choosing partners who offer exactly the right proportion of stimulation and support.

Fulton has a knack for personalizing lyrics that were written the better part of a century ago. At her best, she doesn't just sing the songs, she inhabits them. She makes potentially banal lines like "There is nothing I couldn't' do/If I had you" (from "If I Had You") sound utterly convincing. On "Exactly Like You," the disc's striking opening track, Fulton stretches words beyond their normal length, leans hard on certain syllables, and waxes light and airy on others, all in the service of telling a emotionally cogent tale. A playful disposition and sly sense of humor surfaces during the last word of "Humble or poor, rich or renowned" (from "If I Had You") as she emits the slightest of laughs.

Fulton's improvisational style on the piano is as arresting as her vocals. During medium tempo tracks such as "Exactly Like You" and "Land's End" she cleaves to Miner and Tainaka's buoyant pulse, leaves a considerable amount of open space, takes her time to express ideas in a concise, orderly manner, and for variety's sake, inserts the occasional startling, accentuated phrase. An extended chordal interlude during the second chorus of "Exactly Like You" roars like a big band brass section. Although "The Sheik of Araby" and "Easy to Love" are interesting up tempo set pieces, the slightly slower "My Heart Stood Still" and "The Breeze and I" bring out the best of Fulton's no nonsense, relentlessly swinging bebop-oriented conception and chops.

A few years ago Fulton had a gig in a cavernous Northern New Jersey restaurant full of noisy, inattentive patrons. Although it was difficult to discern all of the details, the depth of her talent cut through the din. In the years between the gig and The Breeze and I Fulton has developed an impressive skill set without tarnishing the magical quality that makes her special. To quote the words of another American Popular Song, the best is yet to come.