Charu Suri: The Book Of Ragas

By Dan McClenaghan
December 15, 2019
Sign in to view read count 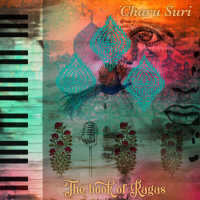 Charu Suri takes piano jazz and combines it with the sounds of her native India on The Book Of Ragas. The set is a freshening of the format, with vocalist Apoorva Mudgal, a performer of ghazals (lyric poems) and Sufi music, contributing.

Suri first recording, 2019's Lollipops For For Breakfast (Amala Records), took its inspiration, in part (the title tune) from her daughter's unconventional first meal of the day request. It also offered up a beautiful cover of Hoagy Carmichael's "The Nearness Of You," along with the Indian sounds of "Raga Sala" and "Brahma Vishnu Shiva. " With The Book Of Ragas the South Indian-born pianist (now New York-based) takes her personal concepts deeper into the traditional sounds of India.

Four ragas are presented. "Raga 1" rides an understated rock beat, a crafting of a sort of playful profundity, accompanied by the poetry of a Sufi kalaam (a devotional song) bemoaning the suffering of unrequited love. "Raag Kalyani" evokes a timeless sense of deep calm; "Raag Bhairavi," the evening raga, is perhaps the set's loveliest piece. It slips into habanera rhythm while sounding suffused with an exotic spirituality. And "Raag Hemant," inspired by a folk melody, features Suri's supple yet lush piano touch revealing her classical background.

Throughout, Apoorbva Mudgals's vocals exude an enticing charm, on a set that takes jazz into the land of the raga. And a bonus: a great album cover from Indian artist Upasana Asrani—one of the year's most beautiful.