Louis Durra: The Best of Both Possible Worlds

BY HRAYR ATTARIAN
September 6, 2012
Sign in to view read count 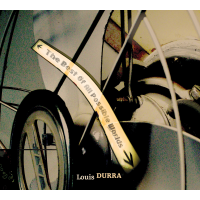 Versatile pianist Louis Durra is no stranger to genre bending experiments. His resume as a recording artist includes sessions with church choirs and musical casts, as well as Christmas discs and those with his more mainstream jazz trio. On The Best of Both Possible Worlds, he interprets eight popular tunes ranging from light rock to reggae, in addition to two originals that seamlessly blend in with the album's overall concept.

Drummer Jerry Kalaf showcases his classical influences on his contribution, the mellifluous dance "Ersatz Waltz," enhancing the mood with his brush work, while bassist Larry Steen demonstrates his lyrical side on the acoustic version of his instrument. Complementing this piece is the trio's take on Radiohead's "No Surprises." Durra's sonata like pianism, Kalaf's shuffling percussion and Steen's rock solid lines build gorgeous harmonic flourishes.

The jazziest track is Durra's own "The Back Seat." Its cool tone and deceptively simple melody highlight the sublime camaraderie and the musical interplay among the group. Durra's relatively lengthy improvisations are repeated on a tighter reading of Bob Marley's classic, "No Woman No Cry."

Certainly neither for hardcore fans nor purists this, nevertheless, engaging record that closes with DJ Rob Swift punctuating solos with rubs and scratches, is a good introductory portal to jazz from the world of more crowd-pleasing music.

Title: The Best of Both Possible Worlds | Year Released: 2012 | Record Label: Self Produced