BY DANIEL GARRETT
July 8, 2002
Sign in to view read count 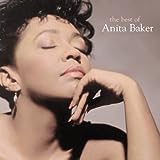 On The Best of Anita Baker, the singer goes from singing that “love like ours is heaven sent, each day a day to remember” in the song “Angel” to singing “you should have heard the way he shouted and the way that I screamed” in “I Apologize,” a movement from a romanticism that is positively adolescent to a mature realism. Baker, a singer whose tones suggest the melding of jazz, gospel, and the calmer speech-song of popular music singing, is one of the better singers to have emerged in the last twenty years.

It is a cliché to say that jazz is a mighty river with many tributaries but it’s also a fact. Jazz is improvisation, syncopation, swing, and experiments with rhythm and tone—and it is both technique and attitude, and while it is easily discerned in the work of Louis Armstrong, Miles Davis, Henry Threadgill, and Wynton Marsalis, traces of it can be seen in everything from Stevie Wonder’s “Sir Duke” to rock singer Dave Matthew’s unusual vocal style. Years ago, when Baker was first being described by some people as a jazz singer, Betty Carter got angry. After Baker released her Compositions album, which through instrumentation, the use of certain arrangements, and a more live sound brought Baker closer to jazz, Baker said that now Carter would take her phone calls.

Unfortunately, despite Baker’s vocal gifts and the sometimes astute quality of some of her lyrics, too much of the music that accompanies her voice on The Best of Anita Baker is bland and soupy, so much so that it’s hard to categorize: it’s not jazz or rhythm-and-blues. It’s mostly a drum beat with piano and sometimes horns, guitars, and strings that provide Baker a mostly pleasant though dull and somewhat formless background as she uses her extraordinary voice to sing of love, desire, anger, and pain. (One of the interesting things about Baker’s singing is her anger, which shows itself not only in love-gone-bad songs but in the intensity of some of her singing of various lines in other songs.)

The Best of Anita Baker collects songs from her various albums— The Songstress (1983), Rapture (1986), Giving You the Best That I Got (1988) , Compositions (1990), and Rhythm of Love (1994)—and it is a good anthology, though it’s to be regretted that some of her performances of songs such as Van Morrison’s “Moondance” and Carly Simon’s “You Belong to Me” and her rare explorations of classic popular songs such as “My Funny Valentine” and “The Look of Love” were not included. The last three songs are on her Rhythm of Love album and the last two of them are the closest Baker has come to an established jazz repertoire, though her work is often heard on “smooth jazz” radio stations. (I think that Baker once performed Billie Holiday’s “God Bless the Child,” but that may have been a dream.) If such work had been included, one would have then a more complicated sense of Baker’s abilities, though it is true that Baker has not produced as many recordings as one would like or deem necessary in order to consider her a singer of major importance. (More than six years have passed since Baker’s last album of new songs, Rhythm of Love.) It’s not that quantity is as important as quality, but that the more albums she produces the more a singer has the opportunity to sing about a wide range of subjects and perform songs by great songwriters, two things than can help to measure her talent.

The songs on The Best of Anita Baker are mostly presented chronologically as they appeared from album to album. In “You’re the Best Thing Yet” and “No More Tears” Baker uses the higher part of her range, conveying significant sincerity and a kind of hysteria. “Sweet Love” has more structural tautness than the first couple of songs on the anthology, but Baker’s phrasing begins with this song to be somewhat slurred and the lyrics are of the “I’m in love, sweet love...It will always be this way” variety. (Someone I know once remarked that Baker seemed only to sing vowels.) In “You Bring Me Joy,” she sings “I saw your face and then I knew we would be friends,” and “You’re the finest thing I’ve seen in all my life.” This is love as naiveté, love as fantasy, and love as religion: a complete giving over of reason and self to love. One hears both desire and anger in “No One in the World” as she sings “please take me back, I can’t go on” and “I’ll do whatever it takes,” and this is clearly an adult woman singing.

Baker’s phrasing is light and energetic in “Giving You the Best That I Got,” a song in which she sings “I feel as if my home is in your arms.” In “Good Love,” she sings, “I wanna know what good love feels like,” adding “There’s a void that stands between us and it seems that it’s getting harder to relate.” The arrangement of “Good Love,” especially of the background singing, is smooth and soulful. (In those songs and others on the Giving You album one can hear the well-incorporated vocal influences of Ella Fitzgerald and Sarah Vaughan.) “The commitment that we share is a welcome sacrifice,” she sings and this too seems an adult observation.

Much of late twentieth-century popular music has been geared to the young and this has meant increasingly that charm and rhythm play a large part in its appeal, but also that the music (lyrics and song structure) is too frequently crude and ignorant. While performers such as Frank Sinatra, Aretha Franklin, Stevie Wonder, and The Beatles may have appealed—and wanted to appeal—to young people when they were young and produced a contemporary music, it is also true that their knowledge of music was broad and they kept older models of quality in mind. The Beatles admired not only Chuck Berry and Little Richard but the writers of classic pop songs from the 1930s and 1940s. Marvin Gaye longed to record an album of songs like Nat King Cole and Sinatra. In more recent times, singers such as Linda Ronstadt, Carly Simon, Natalie Cole, and George Michael have returned to what is now called the classic American songbook, much of which are also jazz standards.

While much rock-era songwriting from the 1950s on is little more than suggestive fragments, those older songs—though sometimes sentimental and self-denying—are often concerned with common experiences from a level of wit and insight; those songs engage the listener and their forms usually render experience whole and satisfying. Some of the better songwriters of the last thirty years—from Carole King, Joni Mitchell, Bob Dylan, and Curtis Mayfield to David Bowie, Talking Heads, Eurhythmics, and Sade—managed to write of love as a necessity but one that took place in the real world amid competing concerns and not always with desired results, very intelligent songs. The songwriting of young rock musicians in the 1990s (from the Afghan Whigs to Hole to...) offered thematic progression, as their songs not only had little if anything to do with romanticism but explored acute, disturbed, and eccentric psychological states. Their emotional richness, sometimes raucous and rough, made up for whatever fragmentation there might be in song structure. Unfortunately, much overtly African-American music forms such as rhythm-and-blues have been stagnant, recycling old ideas, motifs, and sentiments. Often it seems as if many of today’s young performers of popular music have little knowledge of music other than what their peers (or very immediate antecedents) are doing. Consequently, a singer of Baker’s age, emotional range, and sensibility stands out, and when she finds or writes songs that match that range the result is likely to be remarkable.

The strongest song on The Best of Anita Baker is “Fairy Tales,” originally on the Compositions album, a song in which a woman recounts her mother’s telling her fairy tales about life and romance when she was a girl, and how the daughter finds that the experiences she has as an adult are far from those tales: “she never said that we would curse, cry, scream, and laugh.” Baker sings, “The story ends as stories do, reality steps into view—no longer living life in paradise or fairy tales.” The music—intense, and jazzy without being jazz—rushes forth as she sings, “You never came to save me, you let me stand alone” and “I found a poison apple, my destiny to die” and “my fantasy is over, my life must now begin.” The song seems an inevitable progression lyrically and musically, and Baker’s performance is masterful.

“I admit I was out of control” and “You say things you should not say, I never meant to treat my baby that way,” in “I Apologize,” in which the singer admits her own culpability in making reality what it is, less than a dream, an admission most of us must make.

The Best of Anita Baker is a good but surprisingly disappointing album: Baker’s voice deserves a greater range of songs.