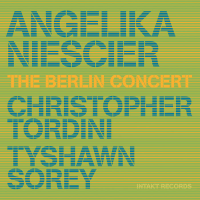 For almost twenty years, German saxophonist Angelika Niescier has been creating forward-thinking jazz that expertly straddles the line between intricate structure and freewheeling energy. Nowhere was this aesthetic vision realized more acutely than on NYC Five (Intakt Records, 2016), her quintet album co-led with pianist Florian Weber. A delightful and infectious release, it signaled Niescier's rise to prominence among the front ranks of contemporary jazz musicians, a status further solidified the following year when she won the Albert Mangelsdorff Prize, Germany's top jazz award. In lieu of an acceptance speech at Berlin's Jazzfest 2017, Niescier decided to let her music do the talking, with the help of drummer Tyshawn Sorey and bassist Christopher Tordini, both of whom anchored the rhythm duties on NYC Five. That performance is found on The Berlin Concert, and it is a document sure to be remembered as a major signpost along Niescier's storied musical journey.

Niescier's ambitious compositional choices are illustrated by the album's opener, "Kundry," which is taken from her jazz-inspired re-envisioning of Richard Wagner's Parsifal, a project she first rolled out in 2013, when she performed a version of it with a big band and mezzo-soprano vocalist in Washington, D.C. The quicksilver intensity of the piece is evident from the outset, as the trio roars from the opening bars, Niescier playing as though she still has something to prove. Her endlessly inventive lines charge almost recklessly over the incessant pulse provided by Tordini and Sorey, who are totally locked into Niescier's concept, thriving on the tensions built into the piece, with precision and liberating abandon present in equal amounts. At twelve-plus minutes of riveting music, it's a thrilling start to the album.

The second track, "Like Sheep, Looking Up," was inspired by concerns surrounding environmental degradation, and it gives a glimpse of Niescier's long-standing desire to use her music to address pressing political and social questions. It is also the most abstract and mysterious track on the record, with Tordini's arco bass creating a moody ambience that Niescier builds upon, and Sorey limiting himself (uncharacteristically, on this record) to reserved support. There's also a subtle beauty at work here, with a motif strikingly similar to John Coltrane's "Alabama" giving the piece an almost mournful aspect.

After that brief reprieve, the last two tracks provide more of the trio's sheer power. Tethered to the 5/8-time signature implied by its title, "5.8" possesses an almost danceable catchiness that still manages to unleash some ferocious playing from Niescier. And the aptly-titled closer, "The Surge," is astonishing in its relentless motion. Niescier rides the wave of rhythmic density generated by Sorey and Tordini until it finally ends, not so much receding as simply stopping, but not before a dynamic burst of rapid-fire staccato phrases. Finally, the overjoyed (and overwhelmed) Berlin Jazzfest crowd erupts in sustained gratitude for experiencing forty minutes of exceptionally-played, uncompromising music, a fitting tribute to an artist reaching the peak of her craft.