By Mark Sullivan
January 15, 2016
Sign in to view read count 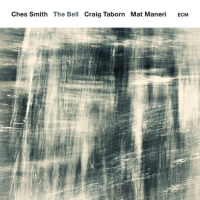 Percussionist Ches Smith presents an album of chamber music for acoustic trio on his ECM debut as leader. Smith is often heard on drums in projects with guitarist Mary Halvorson and as a member of saxophonist Tim Berne's Snakeoil, among others. But he opens this album with the title bell, and is heard on timpani and vibraphone long before employing the drum kit. Pianist Craig Taborn is often heard on Fender Rhodes, filling in for the bass on albums like Chris Potter's Underground (Sunnyside Records, 2006) and David Torn's Prezens (ECM, 2007). He sticks to acoustic piano here—as he did on his solo outing Avenging Angel (ECM, 2011) and his trio date Chants (ECM, 2013)—so he easily blends with Smith and Mat Maneri's viola (which completes the trio). Maneri also has a history with the label, including albums with his father, saxophonist Joe Maneri—from Three Men Walking (ECM, 1995) to Angles of Repose (ECM, 2002)—and his own solo release Trinity (ECM, 1999).

It's very much ensemble music, growing organically, all three voices contributing equally. The sound owes more to contemporary chamber music than jazz: this is not "jazz drummer's music" in any of the expected ways. "The Bell" sounds exploratory, leading into "Barely Intervallic." The third track "Isn't It Over?" builds in intensity, Smith's toms and cymbals finally erupting into the first appearance of the drum kit, which leads into the most song-like music in the program thus far. At first there's a lot of space in "I'll See You On The Dark Side Of The Earth" as well, then Taborn's insistent chords and Maneri's melody line coalesce around the steady rhythm of Smith's drum kit (his powerhouse accompanying also develops into a kind of non-solo drum solo). "I Think" similarly moves from delicate vibes to a hypnotic ostinato pattern.

"Wacken Open Air" is the first track to open with the sound of the drum kit, and "It's Always Winter (Somewhere)" follows that up with a vaguely martial rhythm. The set closing "For Days" begins with an insistent rhythm, which falls away into reflective, lightly pulsed music, then finally a spacious three-way conversation between vibes, piano, and viola. It's a microcosm of the album's progress—but in reverse—and demonstrates the importance of melody in Smith's music. He happens to be a percussionist, but his compositions here tend to be more about melody and texture than rhythm.

This trio began as a casual one-time project, tne music entirely improvised. The combination clicked so well that Smith began writing music for them to play—but leaving plenty of space for improvisation to happen. The result is an intriguing combination of composition and improvisation. It will be fascinating to see how their music develops in future recordings.