BY C. MICHAEL BAILEY
January 31, 2009
Sign in to view read count
Beethoven's Symphony No. 7 in A major, Op. 92 stands alone among the nine symphonies as being more about the expression of rhythm and momentum than the exposition of melody. The symphony possesses melody, to be sure, but the emphasis on rhythm (coupled with Beethoven's carefully chosen melodies) plants a hook in the listener's psyche as potent as any currently available pop song. It is rightfully considered with the composer's Third, Fifth, Sixth, and Ninth, as an important part of the symphonic repertoire.

Beethoven composed his Seventh Symphony in 1811-1812 while in residence in the Bohemian spa town of Teplice, ostensibly to ease his failing health. While in Teplice, Beethoven met the German wunderkind Johann Wolfgang von Goethe, who found Beethoven to be, "...an artist of such spiritual concentration and intensity, such vitality and magnanimity. I can well understand how hard he must find it to adapt himself to the world and its ways," giving credence to modern speculation that the composer was an autistic savant. The new symphony was premiered in Vienna on December 8, 1813 at a charity event for wounded soldiers with Beethoven himself conducting. He also conducted his popular "Wellington's Victory."

The symphony was met with mixed reviews. Beethoven called it his "most excellent symphony" (retrospectively stated before the composer had composed and premiered his famous Ninth) and commentary of the time was mostly positive but not unanimously so. German Romantic composer Carl Maria von Weber heard the symphony and pronounced Beethoven, "now quite ripe for the madhouse." Clara Schumann's father, Friedrich Wieck, opined that the Seventh Symphony could only have been composed by one seriously intoxicated.

That is quite the disconnect. In a fit of hero-worship, Richard Wagner called the symphony "the apotheosis of the dance," going on to add, "...if anyone plays the Seventh, tables and benches, cans and cups, the grandmother, the blind and the lame, aye, the children in the cradle fall to dancing." Not satisfied with simply stating his opinion, Wagner once danced to the Seventh Symphony performed by father-in-law Franz Liszt on the piano. That card, Wagner! 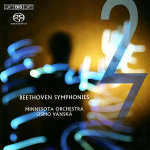 Osmo Vanska's Beethoven with the Minnesota Orchestra has been a uniform success. Vanska harbors no period performance tendencies. His tempi are brisk without being rushed and his dynamics are nothing less than perfect. Balance is the touchstone for Vanska's Beethoven. He is respectful of the score without being confined by it and extends to its performance a well studied ear to performance practices of the past century. Vanska's approach is as much visceral as it is intellectual.

The first movement, marked Poco sostenuto—Vivace, is what separates the pedestrian from the divine. It is a deceptively integrated sonata form that more often than not atomized to the point of being disjointed. Well performed, as with the Klieber or Daniel Barenboim's recent set with the Berliner Staatskapelle (Warner, 2000), Vanska captures a forward leaning momentum in the overall story of the first movement that is not accentuated in other recordings. The march-like allegretto second movement is perfectly paced, neither too brisk nor too relaxed

Vanska's balance extends to the sonics BIS imparts the super audio disc. The recording challenge has traditionally been a tug-of-war between the brass and strings, one or the other often drowning out its counterpart. No such problem here. All elements of the orchestra exist on an equal footing, guided expertly to the sunny closing Allegro Con Brio. It may be too early to say, but Vanska's Seventh very well could challenge and overtake Kleiber's time honored interpretation. 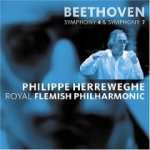 Philippe Herreweghe's Beethoven is a different animal altogether. Long steeped in the period performances of Bach, Herreweghe approaches his Beethoven not unlike Nikolas Harnoncourt did with his Chamber Orchestra of Europe (Teldec, 1991). He likes to pay attention to the period scholarship while employing modern instruments (though Herreweghe does use natural horns, which can be unruly). On the whole Herreweghe has much to offer his Beethoven, giving it an organic flavor, rustic and compelling.

Herreweghe's Allegretto demonstrates that difficult pacing demanded by Beethoven in his composition. The trick is to pace this processional to where it threatens to almost drag without doing so. The natural horns are effective but lack the warmth found in Vanska's account. This is neither good nor bad, it simply is. Striking are Herreweghe's strings, mixed very much to the front, imaging clearly, like period instruments without the harshness. The strings are very three dimensional, again like his earlier account of the Fifth where the listener can almost enter the piece of music and walk around.

Herreweghe's Seventh is respectable with its brisk and loud Presto and assertive Allegro Con Brio. His forceful brass and reeds help paint a pastoral landscape in the Seventh that takes the edge off of the rhythmic emphasis without causing the piece to suffer as a result. Herreweghe's lack of perfection in comparison to Vanska's performance gives his performance of the Seventh Symphony a human face, one that is easy to read and understand. We are fortunate to have two such diverse and fine performances of this music.