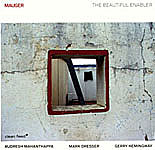 Mauger, which is a word defined simply as "in spite of or in opposition to, notwithstanding," begs the questions as to what this marvelous trio opposes. It's definitely not creativity or cooperation. Rudresh Mahanthappa, Mark Dresser and Gerry Hemingway make music in spite of the dumbing down of the popular music culture, notwithstanding the current trends in the market. It makes no difference what title this band chooses, its bold effort stands alone as a stellar piece of originality and inventiveness.

The veterans, bassist Mark Dresser and drummer Gerry Hemingway, are probably best known as half of Anthony Braxton's famous quartet of the 1980/90s with Marilyn Crispell. Their jazz credentials are without question, whether playing in the New York scene or some free improvisations in Europe. The third member, saxophonist Rudresh Mahanthappa is a rising star whose playing is influenced by his Indian heritage and formed at Berklee and in DePaul University's music programs. He distinguished himself on recordings with pianist Vijay Iyer and on his own Codebook (2006) and Mother Tongue (2004), both on Pi Recordings.

This session for Clean Feed Records is Dresser and Mahanthappa's first, but the fifth for Hemingway. The trio's approach, a more open improvisational over composition logic, fits the label's mission statement.

The disc opens with "Acuppa" a post-hard-bop piece that orients towards Ornette Coleman as channeled through 21st century Brooklyn jazz. The groove dominates, falling easily in line with the trio. As the disc proceeds, less is blatantly revealed as improvisation and openness prevail.

The title track is a pecking note dance of intricacies reminiscent of Mahanthappa's recordings. The logic of the composition is mathematical yet open and quite free. The saxophonist's composition "Intone" opens with his solo playing a progression of wavering notes that calls his partners to also wander in and out of the mist of this tune.

Likewise, Dresser opens "I'll See You When I Get There" bowing some off-kilter notes before Hemingway skids in with some cymbal scratching. Far removed from meaningless dribble, Mahanthappa ties the music together with urgent notes that smear the windshield of this track. Throughout, his playing, with its forceful manner and clear notes, recall the late Jackie McLean.

Acuppa; Bearings; Flac; Intone; The Beautiful Enabler; I'll See You When I Get There; Meddle Music.