By Roger Farbey
August 1, 2019
Sign in to view read count 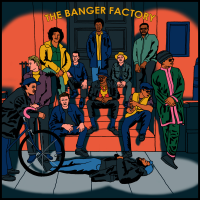 The Banger Factory, the follow-up to Mark Kavuma's debut album Kavuma (Ubuntu, 2018) is no less impressive than its predecessor. The title derives from the name of the band that Kavuma leads, which plays regularly at the Prince of Wales (aka POW) venue in Brixton, London. Deschanel Gordon's pensive piano introduction, evoking shades of McCoy Tyner in its expansiveness, heralds the ensemble start proper to "Dear K.D.," a tune dedicated to Kenny Dorham. Kavuma's initial feisty trumpet solo makes its resounding mark, followed by Gordon again and, briefly, Artie Zaitz on guitar.

The title track, centred around a three-chord vamp, has its main theme stated by the ensemble. Incidentally, the first four tracks on the album are arranged for octet but others have varying configurations. Notably, David Mrakpor's limpid vibraphone is in strong evidence here, as is William Cleasby's crackling drums. In the number's concluding minutes, Zaitz's guitar solo is dazzling in its dexterity. The warm ensemble opening to "Mussinghi" evolves into a laid-back organ-driven bluesy piece, with the brass continuing to take centre stage. Appropriately, Mussinghi Brian Edwards takes the first solo on tenor, followed by Kavuma on eloquent trumpet. The gentle ballad "Lullaby To A Fading Star," is a paean to Kavuma's first girlfriend with Mrakpor's vibes solo brimming with poignancy and a subsequent plaintive tenor solo, underpinned by more sultry organ.

"Big Willie," named after Cleasby, whom Kavuma first encountered as a student at Trinity Laban Conservatoire of Music & Dance, is naturally, a feature for drums, and, following something of a tradition in jazz, is reserved for the concluding section of the tune. But, initially, it showcases Zaitz on typically lithe guitar. With his bright tone and fluent delivery he is going to be a guitarist to watch out for.

The short ballad "Songbird," written for septet, is one of two tracks which don't include Kavuma (the other is "Big Willie"), but is still a fine example of the trumpeter's composing skills, for which he takes credit on all tracks. The closer is the swinging bopper "Mrakpor," featuring the vibraphonist in a bluesy solo all wrapped around the horn ensemble's snappy repeated motif, and there's a delightful vibes cadenza to finish the piece. Kavuma's second offering has most definitely consolidated his position both as a burgeoning composer and trumpeter of note.