By BEN SIDRAN
March 20, 2020
Sign in to view read count
The following is an excerpt is from "Chapter 1: Growing Up Cleveland" of The Ballad Of Tommy LiPuma by Ben Sidran (Nardis Books, 2020). 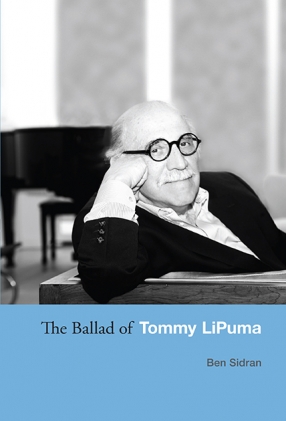 When Tommy wasn't in the barbershop or working with the Sammy Dee band, he was sitting in at local nightclubs, trying to get his saxophone chops together. It was all about trying to find a sound. It wasn't just about playing in tune or playing the right notes; you were looking for a special sound. It wasn't like anybody ever told him, "Hey, you gotta find your own sound." He was just hearing all these cats and he realized everybody he dug had their own voice. Guys like Stan Getz and Lester Young and Paul Quinichette, they were his guys. They called Quinichette "the vice president" because Lester Young was "the president" and some guys starting calling Tommy "little veep" because he was starting to sound a bit like Quinichette.

There was a brother named Weasel Parker who worked in the music store where Tommy got reeds for his horn. Parker also played sax, and one day he said to Tommy, "Hey, man, I play at this joint at Seventy-ninth and Cedar called the Corner Tavern. You should come down and sit in." Tommy knew that a fantastic Hammond B3 organ player named Labert Ellis also worked at the club. By then Tommy had heard Jimmy Smith and was a fan of the B3 sound, so he started going down to the Corner to sit in every chance he had. He was chasing the jazz train.

The Corner Tavern was one of those local dives where you had to keep your coat on in the winter because there was no insulation in the walls and the wind came whistling through the joint. One night, along with the wind, Tommy heard a voice that would open his ears permanently. The jukebox at the Corner Tavern was loaded with hip jazz cuts, and on this night, when the band took a break, Tommy heard a flurry of notes come out of the speaker that was so wild and ferocious that he jumped up and ran to see what it was. It was Charlie Parker playing "Just Friends." He recalls, "It was the most amazing thing I had ever heard. What he did to that song was unbelievable. So of course the first thing the next morning I went down to the Vous and I bought Charlie Parker with Strings. And that's when I really started to put all this music together."

Tommy kept gigging with Sammy Dee and jamming at the Corner Tavern until the following year, when he was twenty-four; that's when he joined up with Nick DeCaro and his brother Frank. Frank played drums, Nick played accordion, and together with various bass players they sang in close harmony, like The Four Freshman, who were popular in jazz circles at the time. (Tommy specialized in the falsetto parts.)

They became a "territory band," working all through the mid-West. They went as far East as the Catskills in New York, where they were once booked at an Italian resort in a town called Caro. The entertainment there opened each night with a house band; the leader of the band played two bass drums and had an act with a monkey that would dance and put his hands over his ears. That was the whole act—the monkey pretending to hate music. The drummer was named Pete Bennett and he went on to become a big-time record promotion guy, even working with The Beatles, The The Rolling Stones and Sam Cooke a few years later. This too is how the record business started.

In this very room one night came several guys from the famed Nola Recording Studios in New York City. Nola was a rehearsal and recording space and at the end of the evening one of these guys said to Tommy, "Listen. Are you guys looking for work? I've got a good friend who's got an agency. His name is Joe Glaser. Let me see if I can get you an audition." Now Joe Glaser was one of the biggest agents in the world; he handled Louis Armstrong and was clearly connected, all the way back to Al Capone. Sure enough, the guy from Nola was telling the truth; he got Tommy and the boys an audition with Glaser and one night after the gig in Caro, they all headed to New York City to audition.

They set up at Nola and at the appointed hour, in walks Joe Glaser himself, along with one other guy, Oscar Cohen. Oscar was Louis Armstrong's personal representative and he didn't say a word, not to Tommy or anybody else in the band; he just sat there, impassive. The guys did their whole show and when it was over Oscar said, "You'll hear from somebody," and then they all got up and left. Tommy, Nick and Frank immediately went out and bought two sets of tuxedos (used)—one white and one red—and went home to wait for the call. When it came, it was from a guy named Joe Mussi at the Chicago office of Associated Booking and he said, "Are you guys ready to work?" And that was that. They were on the road. But not the road they had anticipated.

The first thing Associated Booking did was put them on a tour of Army bases. Everybody met up in Chicago, a motley collection of acts including a big show band, a comedian—a woman who Tommy remembers, "was not at all funny"— a trio of over-the-hill singers called the Bon Bons (three blondes who all looked alike and could have been sisters) and Tommy's group. They got on the bus and started hitting every Army base down through Illinois, Kansas, Tennessee—as far South as Florida.

In the 1950s, the late night air was jumping with the best music in the world and it became one of the few things the musicians lived for. Riding on the bus at night Tommy and the guys discovered the 50,000-watt clear-channel radio stations that played great jazz—one night, outside of Pensacola, they realized they were listening to Ben Webster on a station coming in from Windsor, Canada.

Needless to say, life on the road was rough. They played small bases, SAC missile launch and control sites mostly, with maybe 100 people at each one. The "artists" would perform in spaces that looked like classrooms, where the audience would sit in school chairs (complete with the little table on the arm for writing) and the women would change and do their makeup in the kitchen. "When we would leave," Tommy remembers, "these chicks were such hard-core road-rats that they'd fill their suitcases with whatever canned goods they could cop from the kitchen. We played gigs like that for months, eating out of suitcases and we thought, 'Hey! We're in showbiz!'"