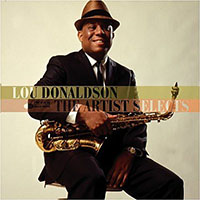 Blue Note's new Artist Selects series presumably takes its cue from ECM's recent Rarum initiative: the tracks on the CDs are chosen by the artists themselves, who also write about them in the liner notes. Along with this set from Lou Donaldson, the first batch of albums includes collections by Freddie Hubbard, Kenny Burrell, and—from Pacific Jazz's vaults, rather than Blue Note's—Gerald Wilson.

There's always a feeling, with any sort of decades-wide anthology, that you're simply skating over the surface of an artist's career and missing a heap of other prime cuts—and with someone like Donaldson, who began recording for Blue Note back in '52, that's inevitably going to happen. But with artist-selects collections, the omissions are at least balanced by the knowledge that it is the artist himself who is calling the tunes. The albums consequently have a context and significance denied to anthologies put together by label executives, however knowledgeable they may be.

Donaldson's hugely entertaining and well-paced selection moves chronologically through the four main periods of his early '50s-late '60s bop to proto jazz-funk career. First up is the '52-'54 bop overture, featuring the saxophonist alongside such contemporary luminaries as Clifford Brown, Horace Silver, Elmo Hope, and Art Blakey ("Cheek To Cheek" to "Lou's Blues"). Then there's the late-'50s Latinised hard bop of the lineups with conguero Ray Barretto ("Dorothy" to "The Masquerade Is Over"). This is followed by overtly soul-jazz recordings made with John Patton and Grant Green ("Funky Mama" and "Caracas") in the early '60s. The selection concludes with three tracks from Donaldson's late-'60s bands with George Benson, Lonnie Smith, Jimmy Ponder, Charles Earland, and Idris Muhammad, including the seminal "Alligator Bogaloo."

The album also contains the lovely ballad "What Will I Tell My Heart," arranged by Duke Pearson for octet, from '67's Lush Life. Recorded a month or so before Alligator Bogaloo, the album lay on the shelf for years, because Bogaloo was enjoying extended chart success... and if it ain't broke, don't etc.

Semiologists will enjoy the liner notes, by the way. Donaldson states unequivocally that he regards himself as an artist/musician rather than an entertainer—but he's a working musician and it's clear that he measures his success largely in sales terms, rather than on social issues confronted or high-art aesthetics extended. His essay includes telling references to chart placings, the tailoring of gig repertoires to suit different audiences, colleagues who change instruments (eg. from tenor sax to Hammond organ) to reach bigger audiences, and other accomodations with the marketplace.

But like he says, Donaldson is ultimately a musician, not a hack entertainer, and that's why the music on this album stands up as well as it does today, decades after it was recorded. Party on.

Cheek To Cheek; Cookin'; Lou's Blues; Dorothy; Herman's Mambo; The Blues Walk; The Masquerade Is Over; Funky Mama; Caracas; What Will I Tell My Heart; Alligator Bogaloo; Peepin'; Caravan.