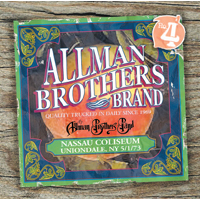 With a new independent licensing agreement now in place, and the 40th anniversary package(s) of Brothers and Sisters (Capricorn, 1973) giving that title its proper due, the Allman Brothers Band may be fundamentally rethinking its approach to its recorded archive. With revelatory recordings of the original lineup limited due in large measure to a relatively finite repertoire, comparably essential titles within the iconic Southern band's legacy deserve due attention, in particular Nassau Coliseum Uniondale, NY 5-1-73.

Dickey Betts had assumed a more prominent role within the Allman Brothers Band upon the death of founder and co-guitarist Duane Allman, eventually attaining an even higher profile than the namesake of the group—keyboardist, vocalist, and composer Gregg Allman. The release and popularity of Brothers and Sisters, following Eat A Peach (Capricorn, 1972) consolidated those positions as did, to a less degree, the remaining Brothers' performances as a quintet because live appearances like Macon City Auditorium 2/11/72 (AAB Recording, 2006) and studio records like Eat A Peach were so few.

Betts' invocation of country strains, into an instrumental style once dominated by blues and hard rock, is more evident on the early summer concert close to two months prior to the original release of the group's fifth album. The Allmans' performance of its future hit, "Ramblin' Man," ripples with an energy that makes the studio recording sound flat, while Betts' guitar tone thickens noticeably as he wends his way through "Trouble No More," affecting a sparkling contrast with Chuck Leavell's piano.

On the soaring half-hour conclusion that is "Mountain Jam," Leavell—who joined ABB following work on Gregg Allman's solo debut, Laid Back (Capricorn, 1972)—posits himself as a lynchpin of the transformed sound of the Allman Brothers. Leavell's bright tones are in clear relief to the R&B grit of bassist Lamar Williams, who replaced the late Berry Oakley, just as much as the earthy textures of the bassist's instrument played so effectively off Betts' lighter tones. The band's radical alteration of style also had its affect on the double-drumming of Butch Trucks and Jaimoe Johanson too, their intricate syncopation belying its sheer power.

Less than state of the art technology in use over 30 years ago, along with the absence of further remastering, leaves the overall sound of Nassau Coliseum Uniondale, NY 5-1-73 somewhat thin. To some degree it undermines the impact of the rhythm section, but even more so Leavell, his piano not resonating as fully as it might. Yet these sonic shortcomings cannot undermine the cumulative impact of this performance, particularly the grandeur in the crescendo of an extended climax which includes "Les Bres in A Minor" and "Whipping Post." This just might be as inspired a performance as the Allman Brothers Band has ever given in the course of its nearly 45-year history.