Joe Deninzon: The Adventures Of Stratospheerius

By Glenn Astarita
November 1, 2002
Sign in to view read count 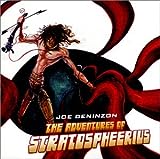 No doubt, Mr. Deninzon possesses monster chops, whereas many of these pieces feature tricky rhythmic maneuvers amid his electrifying violin passages. But, the overly compressed sonic qualities elicit a rather dated or perhaps antiquated sound. Otherwise, Deninzon possesses the compulsory goods to become a major force in the progressive rock and jazz-fusion arenas.