By ELLIOTT SIMON
October 8, 2006
Sign in to view read count 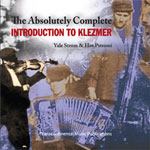 In addition to being an author, a filmmaker and a violinist of the first order, Yale Strom is also a musical archivist. His frequent trips to Eastern Europe and interviews with Rom musicians have done much to advance our knowledge of what the music was like when the archetypal klezmers and gypsies roamed the countryside and shared repertoire. Drawing upon classic archival material and his own painstakingly assembled tunes, Strom and his band Hot Pstromi present The Absolutely Complete Introduction to Klezmer.

With its companion songbook of the same title, Strom has indeed covered all the ground that he purports to, and then some. His quartet, along with clarinetist Norbert Stachel, accordionist Peter Stan and bassist Jim Whitney, creates a beautifully pure group sound to present these 36 short pieces. The absence of drums assists in allowing the music and individual instrumental colorations and ornamentations, so crucial to the overall feel of this music, to shine through in an exceedingly clean fashion.

Klezmer is dance and celebratory music, and Strom has included many examples of the major components of the core dance repertoire, over and above the more familiar freilachs and bulgars, each with its own defining rhythm and tempo. Likewise, tunes used in the various stages of a traditional Jewish wedding, such as the seating of the bride and march to the canopy, are well represented. In addition to Strom's own collected tunes, the Beregovski archives (discovered in Kiev in the '80s) and Wolff Kostakowsky's International Hebrew Wedding Music (published in 1917) are much in evidence.

One disappointment, especially given that Strom is such a scholar of this music, is the lack of any in-depth explanatory CD notes, but for the person in search of a comprehensive musical introduction to the underpinnings of traditional klezmer or the jazz musician looking for unique improvisatory opportunities, Strom's package is exceptional.

Visit Yale Strom on the web.