Home » Jazz Articles » Lukas Ligeti: That Which Has Remained …

Lukas Ligeti: That Which Has Remained … 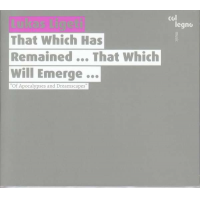 That Which Has Remained ... documents a sound installation created by composer-percussionist Lukas Ligeti at the POLIN Museum of the History of Polish Jews. The concert performance premiered in November 2015 at a location that was once the Warsaw Ghetto. It was followed by this recording the next day at the Polish National Radio studio. Ligeti, artist in residence at the POLAN Museum, explored Jewish life in Eastern Europe through recorded interviews with residents aged 20 to 98. The participants spoke and sang familiar melodies, which were then fed to chamber musicians through headphones as Ligeti orchestrated his score.

During the original production, performers were situated throughout the space and audience members were encouraged to utilise headphones and participate in the performance. Ligeti employed a marimba lumina, a MIDI controller, to alter sounds in musicians' headphones and marshal the presentation. The interviews and songs Ligeti captured as research for this performance probably conjured first person memories from the holocaust survivors and also a kind of genetically-passed impressions on those who were born after the destruction of the Warsaw Ghetto.

This recording without an audience is nonetheless a powerful document. Comparable to the creations of Philip Glass and Alessandro Bosetti, altered pitch voices are woven into the musicians' performances. Barbara Kinga Majewska's voice, an aural memento mori excavated from the past, soothes while spoken and sung voices rise behind her. Besides the Yiddish and Polish voices, Jerzy Jurandot's text "City of the Damned—Two Years in The Warsaw Ghetto " is recited in English, towed along by the chamber orchestra. The recording is a combination of ineffable sadness and the triumph of the human spirit.

Voices … Silence …; Awakening … Recalling … Saposhkelekn; City Of The Damned; Elusive Counterpoint; Andenk an Betz … in the papers, she was Polish; Oyfn Veg … in this country.