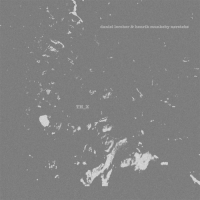 Austrian sound artist Daniel Lercher and Norwegian experimental trombonist Henrik Munkeby Norstebo, known for his collaborations with Swedish double bassist Nina de Heney and drummer Raymond Strid, first met in the Czech republic in 2010. The two took part in the 30-piece Czech-Norwegian- Austrian improvisers orchestra and decided to keep working together. They devised the pieces on their debut project, TH_X, for a series of concerts in Trondheim in 2011 and revisited and recorded these pieces a year later.

This duo investigate the basic fragments of sound. The breaths that operate the acoustic spectrum of the trombone and its meeting points with laptop-produced minimalist hiss, sine waves and noises, all processed and filtered with a special software that Lercher devised. Lercher and Nørstebø merge these sound sources into distinct fragile and almost transparent sonic entities, surprising in their cohesive power and spontaneous freedom.

The five meticulous pieces are delicate and abstract sonic storms. Each pieces has its own unique feel and atmosphere. The first two are minimalist, spare textures. The third offer an intense, disturbing collage of nuanced noises. The fourth is an enigmatic cinematic soundscape and the last one forms an atmospheric sound poem clouded with gentle drone noises.