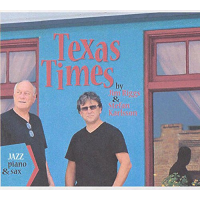 Recording a duo album is something that old friends Jim Riggs and Stefan Karlsson have wanted to do for some time, and they make the most of the long-delayed opportunity on Texas Times, an eloquent and engaging recital that never wears thin in spite of its more or less familiar playlist and the fact that Riggs limits himself for the most part to the alto saxophone (the qualifier "for the most part" is called for as there are times, such as on "Our Waltz" and "Be My Love," when Riggs' instrument of choice sounds much like a C-melody sax, an instrument that is seldom heard these days, to say the least).

The album's name evidently arises from the fact that Riggs and Karlsson are both former students and, later, faculty members at the University of North Texas in Denton. Even though this is their first recording as a duo, they are hardly strangers, especially in musical terms, and affirm from the outset that they are on the same harmonic and rhythmic wavelength. Karlsson is entirely secure in his three-tiered role as melodist, soloist and accompanist, listening earnestly and responding instantly to Riggs as he weaves his colorful lines above and beyond a given song's structural foundation. Karlsson introduces most of the tunes before assuming a supportive stance as Riggs states the melody, leading to expressive solos by one or both of the principals (Karlsson has the opener, "Misty Night," to himself).

The music, for the most part, is tried and true, consisting of six or seven evergreens from the Great American Songbook, a brace of jazz standards (Tadd Dameron's "On a Misty Night" and the Billie Holiday staple, "Good Morning Heartache") and others best described as on the fringe of prominence (Ray Noble's "Our Waltz," Leonard Bernstein's "Some Other Time," Mitchell Parish's "Ruby"). Riggs and Karlsson bring out the best in each of them, delivering measured yet enticing versions that blend melodic charm with improvisational acuity. If not quite a dynamic duo (their generally even-tempered style precludes that), Riggs and Karlsson are invariably earnest and amiable, and Texas Time is an aesthetic and artistic tour de force.

On a Misty Night; Our Waltz; The Second Time Around; Some Other Time; Ruby; Good Morning Heartache; You Don’t Know What Love Is; Be My Love; All the Way; Young and Foolish; They Say It’s Wonderful.