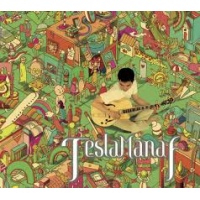 The beneficiary of free-range musical knowledge gleaned from his father's record collection---one which included discs by the Mahavishnu Orchestra, Gentle Giant, Pat Metheny, and Soft Machine—guitarist / composer Tesla Manaf has subsequently developed a completely unique musical voice. Perhaps more importantly, he's a daring young fellow who's not afraid to take artistic chances. Classically-trained, he tired of that world's rigidity and embarked on a career in jazz and improvised music in 2007. While his compositions contain some truly startling echoes from the fringes of avant-prog-rock's "RIO" (Rock In Opposition) movement, Manaf's music is executed with jazz-like flow without sacrificing precision or clarity. In Manaf's hands, the seemingly contradictory influences of contemporary classical music, the sounds of his native Indonesia, and the forward-leaning rhythms of modern jazz consistently create interesting tensions. Perhaps that's why so much of Tesla Manaf is so fresh and invigorating. The album itself is actually a compilation of two completely separate efforts, featuring two completely different bands: It's All Yours recorded in 2011, and A Man's Relationship With His Fragile Area from 2014.

Unlike his elder countrymen Dewa Budjana and Tohpati Ario Hutomo, Manaf doesn't fit the profile of a typical 21st century guitar slinger. Manaf plays a hollow-body electric and uses no effects, preferring to let the crystal-clear natural sound of his instrument carry the day. Drums, bass (electric and acoustic) and reeds (clarinet, mostly) are also played without processing or electronic effects; and with that same razor-sharp precision. Most startling of all is the fact that Manaf and the members of his backing band---each with a fully-developed and mature sound on their respective instruments---appear to be in their early twenties. Manaf's pieces are wide-ranging, multi-sectioned, and full of bizarre twists, mind- boggling unisons, and crazy rhythms. Yet, there's no shortage of warmer, more lyrical sounds. "Early Years," for example, is truly poignant, with passages that indirectly recall John McLaughlin's "A Lotus on Irish Streams." The almost Medieval-flavored "Chin Up" has a hocketed melody, and then takes off on a "Greensleeves"-inspired folk-jazz tangent, with Hulhul's clarinet singing a simple melody over Manaf's lovely arpeggios. This breaks down into a composed section that alternates the gentle opening harmonies with furious guitar / clarinet unisons. Manaf's penchant for humor is evident throughout A Man's Relationship With His Fragile Area, from the cartoonish march that opens "The Sweetest Horn" to the title track, where Manaf's guitar ghosts the speech cadences of a very enthusiastic-sounding Indonesian lady. This is tremendously strong, very distinctive music.

The second half of the album is a reissue of Manaf's first recording as a leader. It's All Yours integrates a very well-known Balinese gamelan—Mahagotra Ganesha, from the Bandung Institute of Technology—into his jazz-fusion band. The results, while much less startling than A Man's Relationship With His Fragile Area, have an undeniable warmth and charm. The music veers from slick, proto- smooth-jazz to complex prog-fusion; comparable to Dewa Budjana's Dawai in Paradise (Strings in Paradise) (MoonJune Records, 2011). If you're not familiar with Budjana's work, imagine Pat Metheny or Larry Carlton having a jam with a gamelan and you're 1/4th of the way there. While there's no shortage of friendly happy melodies, the darker moments of It's All Yours are the most interesting. Here and there, the straight rhythms of the gamelan seem to clash with the swinging, pliable rhythms of sounds of Manaf's very accomplished fusion ensemble. It's an interesting idea that works far more often than it doesn't. On its own, Manaf's self-produced, independently-distributed debut represents a bold step that was also commercially successful in his homeland. As good as it is, it gives few hints of the inconceivably bold musical strides that Manaf took over the next three years.

A Man's Relationship With His Fragile Area; Necrophilia; Counting Miles & Smiles; Moving Side; Early Years; Multiply By Zero; Chin Up; The Sweetest Horn; It's All Yours (Parts 1-6).