By Elliott Simon
December 13, 2002
Sign in to view read count 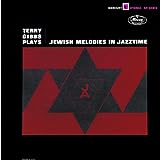 A klezmer band quickly transitions out of a vibe-based jazz quartet. Is this the latest in downtown fusion projects? No. It is the CD release of 1963's Terry Gibbs Plays Jewish Melodies in Jazztime. Terry is the remaining member of the Gibbs-Hampton-Jackson-Norvo "Big Four," whose collective work helped transform the vibraphone from a novelty into a serious jazz instrument.

Although this session is referenced as a fusion forerunner, the musicians for the most part keep swing and freygish in separate containers. Crisp inventive Gibbs interpretations of standards like "Bei Mir Bist Du Schoen" and "Papirossen" that include Bud Powell influenced adventurous piano efforts by a very young Alice Coltrane are predominantly featured. Drummer Sol Gage (Gibbs’ brother), clarinetist Ray Musiker and trombonist Sam Kutcher provide short hot klezmer breaks. While abrupt tempo and mode changes at times give the illusion that a door opens and closes to a Jewish wedding in the next room, this recording is a significant historical nexus that extends the past into the future.

Trace back the music to Gibbs’ father, bandleader Abe Gubenko, or discover the latter progeny collaborations of drummer Gerry Gibbs with saxophonist Ravi Coltrane. Explore the career of still performing Ray Musiker and his own two (yet to appear on CD) 1963 LP classics or simply enjoy this release that displays great musicians at various stages in their careers. While the 1955 Tarras/Musiker brother collaboration, Tanz!, is a truer swing/klezmer fusion, there are many magical moments on this disc such as the beautiful clarinet vibraphone interplay on "My Yiddishe Momme" and "Vuloch's" seamless segues through multiple genres. Two Gibbs self-penned numbers, "Nyah Shere" and "S&S", remind us that we are in the presence of vibe royalty. These cuts presage fusion 40 years hence while recalling Jakie "Jazz-Em-Up" Hoffman xylophone stylings from the earliest days of jazz/klez fusion 40 years prior. If you own the LP, the digital transfer will re-impress, plus, the mini-LP packaging is very cool. Check it out for the music lovers on your holiday gift list.