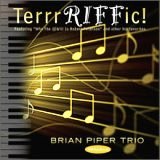 Pianist Brian Piper is one of those local heroes who is venerated in his little corner of the world (in this case, North Texas) but is scarcely appreciated elsewhere. He should, of course, be far better known—his talent alone commands it—and an album such as this, on which Piper displays his unerring taste and remarkable versatility, certainly won't harm the cause.

Besides the songs already noted, the trio performs Joe Henderson's lively "Recordame," Sammy Fain/Paul Francis Webster's sentimental "Secret Love" (played faster than usual), Miles Davis' urbane "All Blues" and Gerry Mulligan's lyrical "Five Brothers." Seaton has arco solos on "All Blues" and "C Jam Blues," scatting and growling on the last in a manner made popular by the great Slam Stewart. When not soloing, Seaton keeps metronomic time, while Taylor adds enough spice to make the entree as appetizing as one could wish, serving as a capable stand-in for Jeff Hamilton, the drummer on the trio's previous album, Return to the 90th Floor... (90th Floor Records,2006).

There's a story behind "Robert Peterson," but it's best left to Piper to recount it, as he does with good humor in the liner notes. Suffice to say that it dates to his first semester in college and his earliest days as a pianist (he'd begun his studies on trombone and French horn). The trio has great fun with the piece, which is taken at what can best be described as the sort of lickety-split tempo worthy of "Robert Peterson" himself. A marvelous way to end a TerrrRIFFic! album.