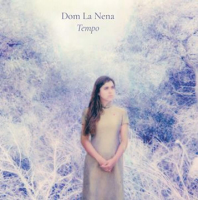 Dom La Nena creates curiously beautiful music by building cello, piano and vocals into layers of electronic sound ranging from a vocal choir to percussion and beats. Most pieces on Tempo—they're more pieces than songs—come and go in a quicksilver two or three minutes and leave behind a sense of wonder. "My intention on this album was to explore new ways to use my instrument," La Nena explains. "So I have used lots of pedals, guitar amps, and effects to change the original sound of the instrument and take it somewhere else."

Even while taking the cello's original sound "somewhere else," there no escaping the classical overtones that the instrument's sound drops in the listener's ear. So Tempo begins from there, right from its title track. "Tempo" seems to say much more than two minutes of music should allow, with criss-crossing cello building the framework and rhythm for her wordless vocal and glimpses of acoustic piano twinkling like a star in the mix. "Maybe because I have studied and listened so much to Bach (when you're a cellist, you spend all of your time working on the six cello Suites of Bach), you can clearly feel the influence here," La Nena explains. The instrumental "Valsa" further suggests a classical recital piece, with one set of overdubbed strings wrapping themselves up in the melody and another harmonizing so closely that they almost have a vocal quality.

She builds up "Moreno" from one deep, foundational root cello sound and brings in other instrumental and vocal sounds tuned to that root, creating Tempo's biggest and deepest—in a way almost tribal—sound.

Strong counterpoint between the instrumental and vocal parts of the arrangement helps "Esperando Alma," more of a figure than a tune at less than two minutes and feeling like a classical piece. "I wrote this album while pregnant with my daughter, Alma. 'Teu Coração' [which means "your heart"] was written for her, and I recorded the sound of her heart while she was in my belly," says La Nena. "That's the beat you can hear on 'Esperando Alma' and 'Teu Coração.'" Tempo's longest and most lushly orchestrated piece, "Teu Coração" rings out its sound of hope and promise with strings and piano and vocals (and, literally, heart), and sings a sweet, uncalculatingly reflective and honest song.