Ernst Reigseger: Tell Me Everything

By KURT GOTTSCHALK
April 10, 2010
Sign in to view read count 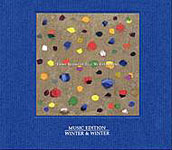 The German label Winter & Winter has a beautiful way of capturing senses of place and preserving them in elegant, corrugated covers. From audio travelogues through Cuba and Trinidad to Sardinian vocal music, the albums feel like books for your ears.

Ernst Reijseger, a central figure among the Amsterdam players swimming in the Instant Composers Pool, has had a productive relationship with the label. On his solo recital Tell Me Everything, he continues his series of Italian in situ recordings with a solo set supplementing the voice of the cello with a menagerie of birds. Recorded at La Commenda di San Eufrosino Volpaia in Tuscany, it's a curious sort of recital for a chattering aviary. Unlike recent recordings-with-birds by Evan Parker or Miya Masaoka, for example, Reijseger does not seem to be playing along with the aviary or even necessarily for them. The 13-track session has a formal feel, compositions by fellow cellist Tristan Honsinger, composer/pianist Fumio Yasuda and Reijseger himself, played solo, beautifully and seemingly straight through. At times the birds quiet down and Reijseger in turn gives them the spotlight on occasion, but there seems to be more happenstance than anything in the solo/sonata.

It shouldn't be left without saying that Reijseger's playing here is remarkable. The subtlety and dynamism in his playing is astounding; he's a master among cellists and an unusual conceptualist. His Winter & Winter works aren't to be missed.