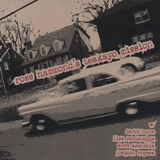 Sacramento based guitarist Ross Hammond's Teakayo Mission is one of those rare, indie sessions that creatively succeeds where so many others fall by the wayside. Leading a potent group that listens as effectively as it plays, Hammond's quartet features saxophonist David Boyce, bassist Lisa Mezzacappa and renown drummer Scott Amendola. Covering an eclectic variety of tunes with a cohesive sonic sensibility, Hammond merges rock, jazz and free improvisation into a cohesive collection beyond category.

Hammond's writing favors a quirky, abstruse sensibility, tempered with an introspective streak. His jaunty sense of melody and spirited rhythmic outlook is in full bloom on the punchy "54321 Contact" while the rubato meditation "You Don't Wanna Rile Me, Man" drifts along a simmering, futuristic blues-drenched groove. "Free At Last" climaxes with a regal Coltrane-ish rumination that ascends from subdued aleatoric pointillism through bright West African-inspired polyrhythms to a passionate collective meltdown.

With his distortion pedal set to stun, Hammond unleashes his brittle tone in staccato bursts, recalling the kinetic intensity of early John McLaughlin. Delivering his angular phrases with rapid timing, he invokes the melodic fragmentation of James "Blood" Ulmer and the pneumatic irreverence of Sonny Sharrock. On the rockish "Lexingtonian" Hammond tears through intense shards of feedback and pulverizing slide work that conjures the spirit of Sharrock at his most ecstatic.

Boyce's phrasing is intensely rhythmic and driving, often accompanied by subtle electronics such as wah- wah and distortion, lending a surreal effect to his phrases. Forming an empathetic front-line, the interaction between Boyce's electronically augmented saxophone wails and Hammond's searing machine gun volleys at the climactic conclusion of "Hello Mr. Tom" are seamless in their telepathic intensity.

Holding up the bottom end, Amendola and Mezzacappa form a solid, fluid foundation, bolstered by a witty conversational acumen. With percussionist Joaquin McPeek onboard for three tunes, the quintet fuses Afro- Cuban rhythms to progressive structures.

Flying under the radar of the mainstream, Teakayo Mission straddles the border-lines of multiple genres, occupying a creative no-man's-land of the future.