BY AAJ STAFF
September 1, 2001
Sign in to view read count 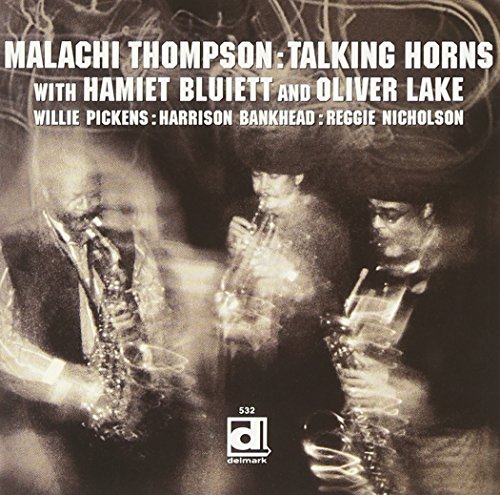 The heresy lives! The jazz establishment (Dr. They) would have one believe that jazz music—a cadaver best appreciated with scalpel in hand while donning a coroner’s smock—died with the innovations of the ‘60s. On his latest Delmark release, trumpeter Malachi Thompson has as a not-so-ulterior motive illustrating that jazz, in its free manifestation, continues as a vibrant creative medium. He and World Saxophone Quartet alumni, Oliver Lake and Hamiet Bluiett, acquit themselves famously in this endeavor and offer a tasty plate of avant-garde music.

Thompson, Lake and Bluiett each bring their own compositions to the all-original program. A free sensibility informs the first half of the set. The session showcases three distinct improvisational voices conversing with one another. Thompson makes economical use of notes and deliberate use of spacing. His trumpet hovers in the middle register and he consistently maintains a moderate tempo. Bluiett’s enormous, jaggedly swinging sound anchors the set. On Lake’s "Brass and Oak" his baritone deftly lurches from growling honks to shrill wails, usually the province of the soprano saxophone. His voice on contrabass clarinet is even more peculiar: low, nasal buzzing. Lake’s piercing explosiveness and unpredictable stops across the range of his horn contrast with Bluiett’s earthy, fat sound.

Evincing his strong sense of jazz history, Thompson sprinkles the program with a couple of bop numbers. Bluiett’s memorial, "Fred Hopkins", to the eponymous avant-garde bassist is a straight blues. Nevertheless, always keeping things fresh, the conventional reprise of the theme at the end becomes mere accent to a screech exchange among all the instruments with one horn at a time barely holding the melody in the background. The other bop tune on the disc, "Lucky Seven", has a riff reminiscent of Coltrane’s "India". Pausing from the free form of the earlier numbers, the horns improvise in a more familiar vain and the extended time allows pianist Pickens and drummer Nicholson to participate.

"Circles in the Air" aptly closes an avant-garde set. The song abandon’s even the traditional head-solo-head structure that most free jazz retains: the ensemble dives right into a free for all squeak-fest. From the horns to Pickens’ clanging chords, bassist Bankhead’s bowing and even the human voice, everyone has his dissonant say. Talking Horns captures the essence of jazz that the best albums do: heavy, fat groovin’ that sways the body combined with incisive, intelligent improvisation that excites the mind.