BY CHRIS MOSEY
October 8, 2017
Sign in to view read count 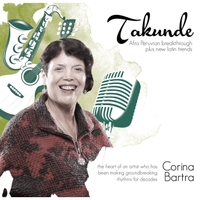 Peruvian singer Corina Bartra mixes the Latin-American rhythms of her homeland with the jazz she hears in New York City, where she now lives. She's been doing it for years... decades in fact.

Working in a niche market within a niche market, she's met with limited success but has battled on, bravely following her star as time yellows her degrees from Queens College, Long Island University and Mannes College of Music.

Bartra's vocal abilities are not exceptional but she performs with feeling and throws herself into her songs with abandon. She labels this, her latest album, "Afro Peruvian breakthrough, plus new latin trends." It contains six of her own compositions, two traditional Peruvian numbers, Joe Henderson's "Black Narcissus" and "El Tamalito" by the Costa Rican composer Andres Soto.

But most noteworthy—and regrettably—the album features an excruciating version of Paul Simon's "Bridge Over Troubled Waters," wailed, rather than sung, in an aurally toxic mix of fractured English and scat, backed up by some manic saxophone from Jay Rodriguez. Vengeance perhaps for what Simon did to that classic Peruvian number, "El Condor Pasa" ("I'd rather be a sparrow than a snail. Yes I would, if I only could.").

Bartra is, mercifully, more at home on the strictly latin numbers, in particular Antonio Carlos Jobim's tricksy "Samba de Aviao." Here she curbs a tendency to vocal excess, while Rodriguez, tastefully paves the way for a fine piano solo by Steve Sandberg.

Seth Johnson plays some inventive guitar on "Samba Malato," a cheerful enough ditty, though it ends rather abruptly. Otherwise, no matter the talk of breakthrough, Takunde is pretty regular latin fare.

When she's not making such music, Bartra studies yoga and the teachings of George I Gurjieff at his Institute of Harmonic Development For Mankind, where, she says, the infinite moment of silence guides her from within.

It was certainly a great pleasure to experience it when Takunde finally came to an end.