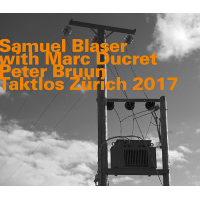 Although in existence since 2013, Taktlos Zurich 2017 constitutes the first record by Swiss trombonist Samuel Blaser's Trio with French guitarist Marc Ducret and Danish drummer Peter Bruun. It's worth the wait as Blaser helms a very responsive trio, so attuned to one another's movement that the spaces are as eloquent as the notes. One of the most talented trombonists on the scene, Blaser makes his instrument mutter, growl, speak and sing, sometimes in multiple registers through his control of multiphonics, while at the same time maintaining a melodicism at the core of his sound.

Ducret (who has also majored with reedman Tim Berne) has been on board for previous quartet outings, notably As The Sea (2012) and Boundless (2011), both on Hatology, but the expansive program makes this perhaps the best place to admire his lexicon of fuzzed snarls, bent notes, ringing reverberations and scrapes. His orneriness helps spice Blaser's conception, as does Bruun's crisp spikiness and frequent avoidance of overt meter. Five titles spread across four cuts include one of the leader's originals alongside three from the pen of the guitarist and one unusual cover. But whatever the authorship, the realizations are flexible enough to suggest spontaneity.

As such, a genuine sense of discovery permeates the unhurried expositions. Thus the opening "Stoppage" shifts from improv give-and-take to knotty unisons, before unfolding to showcase Ducret's elongated corkscrewing lines, a drum solo which pays as much attention to timbre as rhythm, and Blaser's vocal inflections with his mute which create a testifying feel towards the close. The trombonist's reading of Stravinsky's "Fanfare For A New Theatre" proceeds with loose accompaniment which periodically snaps into focus, before segueing into Ducret's gentle lullaby "Useless Knowledge" which serves as a lyrically downbeat coda.

The remainder of the album offsets the somewhat abstract nature of the first half with more earthy moments, most obvious on the final "How To Lose." After a confab of scrawling guitar distortions, wah-wahed trombone and rattling percussion, the track settles into a funky swagger, held down variously by each of the principals, before an understated finale which, although it slightly dissipates the preceding energy, is of a piece with the classy conversational interplay which characterizes this disc.

Stoppage; Fanfare For A New Theatre / Useless Knowledge; Jukebox; How To Lose.