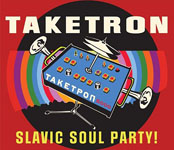 The massive Baltic brass band Slavic Soul Party (SSP) has played in Istanbul and Carnegie Hall, Macedonia and the Kennedy Center, Serbia and the Knitting Factory, and currently resides Tuesday nights at Club Barbes in Brooklyn, which released this fifth SSP album on its own label. "I think Taketron really shows our original style, more so than any of our other records," says Taketron's leader, percussionist Matt Moran. "We get something electrifying: it sounds kind of Balkan and kinda not; kinda American and kinda funk and soul." Barbes label head Olivier Conan concurs: "SSP's music is like 'surf music' for the 21st century: instrumental music for this generation with the same bite, insane energy, and exotic flavors."

SSP features some of NYC's most accomplished horn players, a drummer from Japan, a drummer with roots in Cuba, a Balkan gypsy accordion player, and no fewer than FOUR trombonists! This writer is generally not one to trumpet musicianship (forgive the horrid pun), but SSP's trumpet, saxophone, and trombone players play about as well as any group of horn players you will ever hear. In the title track, their pace and staccato rhythms are absolutely blistering—Eastern European melody and harmony played at punk-rock warp-speed. Military snare drums drive "Baltika" into a Crescent City brass band march, but then its melody twists back toward the Eastern Europe and suddenly the Balkans are leading a parade through New Orleans!

This gumbo boils over into the next tune, "Get It How You Live," a hurricane of collective brass blowing which spasms into wails of joy. The trombonist kicks up a funky ruckus while the drummer smacks around the off beats just enough to keep the rhythm churning and hot—a crackerjack marching brass band ripping into a serious New Orleans bender.

"Sancti Petri" was originally a flamenco guitar piece, here transposed across accordion and trombone. American listeners may smile at the sound of the Moldavian traditional "Sarba," played in double- if not triple-time, from their associated memories of Carl Stalling and his frantic music for classic Warner Bros. cartoons.

Trombone leads the company of mourners who wail and moan the "Canaan Land" blues. Its mood and tempo brighten as their exodus begins, and dancing soon follows as these joyous "saints go marching in." Vibrant and spirited, Taketron is sheer instrumental joy.