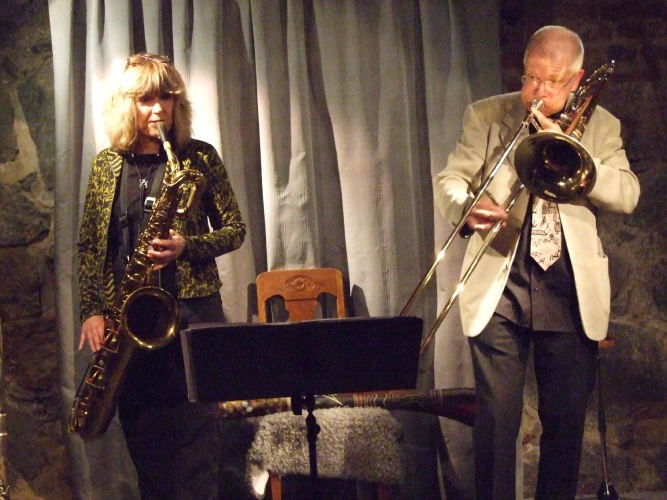 Cecilia Wennerstrom is a Swedish saxophonist who has received several awards by the Swedish Arts Grants Committee. During the '80s, she led the band Salamander and released several albums on Dragon Records. During the '90s, she led her own quartet and released records through Four Leaf Clover. Recently she formed Wela Records/Plugged.

An opportunity opened during the '70s in Sweden that allowed academic education for musicians other than classical music. Before that, I was singing and playing piano at jam sessions.

My approach is mostly matter-of-fact, and my favorite saxophonist is Joe Henderson. I have a small hidden anarchist inside so sometimes I play free jazz. My other favorite is Evan Parker. I like rhythm and harmony. When I play free music I long for harmony and vice versa.

I don't like to teach. I have too much trouble with my own playing and I am always searching for new ways. If If I were to teach again, I would stress the art of breathing.

My ideal band is on my last CD: Maria Kvist on piano, Filip Augustson on bass, and Jonas Holgersson on drums.

I entered a jam session at Northsea Jazz Festival around 1982 because a friend said that Archie Shepp would be in it. Although he wasn't on stage, Benny Golson introduced himself afterwards and so did several other musicians. This is a nice memory. At that time I wasn't musically ready for this challenge, it was more an act of adventure.

My latest CD, Lydian Mars (Wela, 2011), is very good and it is all my own music. But I still think that Minor Stomp (Four Leaf Clover, 1997) is my best recording; on it, I play standards on baritone saxophone. I was tired of being put in a free jazz cupboard and being criticized for doing entertainment music. So I was determined to show that I could play the American songbook if I wanted to, which I did.

I remember listening to "Trinkle Tinkle" by Thelonious Monk in the early '60s on an LP. I think my brother bought it. The song is still in my ears after all these years. I also recall hearing "Summertime," with Ella Fitzgerald and Louis Armstrong, also on an LP.

I've written a fantasy story called Saga of Rim that is rather successful in Sweden, especially as an e-book. It is published in USA through Twilight Times Books.