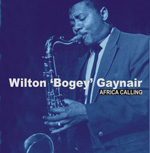 Jamaican tenor saxophonist Wilton “Bogey" Gaynair, whose passionate double-barrelled playing (and take no prisoners technical facility) illuminated the British hard bop scene in the late '50s, is today more or less forgotten. He made one headlong charge of an album, Blue Bogey, in '59, before disappearing into obscurity (or to be precise, into Germany, which at ...