World-renowned trumpeter, Wallace Davenport, was adept at a variety of styles in addition to the traditional jazz that he was most famous for in his native New Orleans. He played in brass bands as a young man; branched out into swing and bebop when jazz itself was changing, before returning to his roots in his later years. Davenport's resume reads like the history of jazz itself. The list of musicians he performed and/or recorded with include the Young Tuxedo Brass Band, Oscar “Papa” Celestin, Lionel Hampton, Count Basie, Ray Charles, Lloyd Price, the Zion Harmonizers, Earl “Fatha” Hines, Quincy Jones, Sammy Davis, Jr., Arthur Prysock, Phil Upchurch, and Frank Sinatra 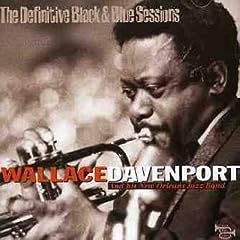 Jazz From New Orleans (Dedicated To The Hot Club Of France)

Darkness On The Delta

Way Down Yonder In New Orleans