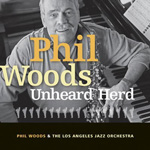 In his long and illustrious career, the late Woody Herman led many big bands, including several known as his Thundering Herds. The Unheard Herd recaptures the music of Herman's Second Herd, aka The Four Brothers Band. Some of the music on this set, a selection of his charts from the late forties, was never recorded by ...