Producers John Nugent and Marc Iacona today announced the full lineup with a record number of shows for the 2020 nine-day CGI Rochester International Jazz Festival. Now in its 19th year, the festival will be held June 19 to 27 and present 335-plus shows including more than 100 free shows and 1750-plus artists performing in 21 diverse venues in downtown jny:Rochester, New ...

Producers John Nugent and Marc Iacona today announced the full lineup for the 2019 nine-day CGI Rochester International Jazz Festival. Now in its 18th year, the festival will be held June 21 to 29 and present more than 320+ shows including a record 100+ free shows and 1500+ artists from around the world performing in 20 ... 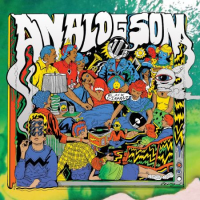 Jordan Linit and Josh Fairman created Analog Son around a studio project involving the Shady Horns, Ryan Zoidis and Eric Bloom (Lettuce/Soulive), and Joe Tatton (New Mastersounds). Since conception the band has now recorded three records with 30 amazing musicians--their 2014 debut, Analog Son, and one of the best albums of 2015, Stomp & Shout. And ...

WEEKEND OF JAZZ RETURNS TO THE BROADMOOR FOR ITS NINTH SEASON Grammy Award-Winning Artist Earl Klugh Is Back This April! Colorado Springs, CO—It wouldn't be spring at The BROADMOOR without our exceptional group of guests, musicians and friends that gather each year to share their passion for jazz. GRAMMY® award-winning guitarist EARL KLUGH annually invites these ...