They were the first of the 'Super' groups combining stars of the musical world, and genuine friends, who had each achieved fame with their own musical talents. The Traveling Wilburys were formed in 1988 and consisted of 5 members:

The Traveling Wilburys began after George's comeback album; "Cloud Nine" was completed, George had to create a bonus track for the European twelve inch version of 'When We Was Fab'

Tom Petty And Me: My Rock 'n' Roll Adventures with Tom Petty 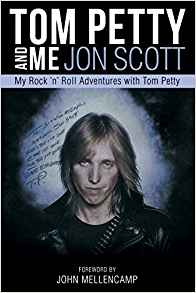 Tom Petty And Me: My Rock 'n' Roll Adventures with Tom Petty Jon Scott 190 Pages ISBN: #978-0692091197 Chickasaw Buddy Publishing, INC. 2018 Tom Petty And Me has a most interesting premise, its effect heightened when considering the late musician's tumultuous history with his record label(s). In My Rock ...

Label: Concord Music Group
Released: 2016
Track listing: CD 1: Handle with Care; Dirty World; Rattled; Last Night; Not Alone Any More; Congratulations; Heading for the Light; Margarita; Tweeter and the Monkey Man; End of the Line; Maxine; Like a Ship. CD 2: She's My Baby; Inside Out; If You Belonged To Me; Devil's Been Busy; 7 Deadly Sins; Poor House; Where Were You Last Night?; Cool Dry Place; New Blue Moon; You Took My Breath Away; Wilbury Twist; Nobody's Child; Runaway. DVD : The True History of the Traveling Wilburys; Handle With Care; End of the Line; She's My Baby; Inside Out; Wilbury Twist.

It's very safe to say there's never been a band like the Traveling Wilburys and equally fair to state no such band has been regarded as they have, either at the time of their inception or with the benefit of hindsight as afforded by the comprehensive package that is The Traveling Wilburys Collection. Yet ...

Tom Petty Opens Up About George Harrison, Mudcrutch and Keeping Out of Politics In an exclusive interview posted on his Website (conducted by fellow rocker Warren Zanes), Tom Petty talks about his Super Bowl performance, Mudcrutch and Barack Obama. On The Traveling Wilburys, Petty says I think George [Harrison]s move Im sure of it, really had ...